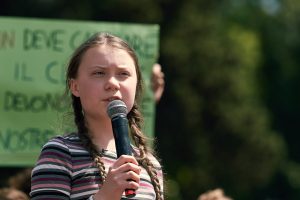 According to NewsHub, any “climate-anxious” supporters of the Swedish teen (who, last I checked, still hasn’t been pulled from the spotlight by her stage parents and hooked up with a good psychiatrist) are apparently helping to reinforce white supremacy in society.

Yup, you read that right.

Apparently the mainstream climate hysteria movement isn’t woke enough on its own, and focusing so much on a white girl shifts the focus off of non-white or indigenous activists and keeps systems of white supremacy in power.

I swear, I’m not making this up. See for yourself:

“Y’all need to ask yourselves why you find it so much easier to hear from white people, regardless of age, when it comes to the violence they have caused across the world,” tweeted No White Saviors, an organization dedicated to rooting white supremacy out of missionary work.

“It is a SYMPTOM of global white supremacy that certain people are HEARD & given a platform, certain people have access to the RESOURCES to be the HEROES that the world will pay attention to.”

Our GOBAL climate is in CRISIS. We need EVERYONE to care about this & take action. With that said, it is high time that the very people who have caused such problems STOP getting praised & recognized for finally doing the RIGHT THING.

That’s not all, sadly. There’s much more.

Greta should have grabbed some children from Flint or NJ and took them to the UN. They are impacted right now by environmental terrorism caused by racism, White Supremacy, and racialzed governance. Greta at the UN was the epitome of White Privilege/White power= Save white kids! https://t.co/9QS10GFIWk

Gotcha, because the Flint water crisis was caused by racist environmental terrorism, and not the corrupt city government grossly mismanaging funds and contracts. Sure.

Then, there’s this dude:

Thunberg’s message is that we need to always think of protecting the little white kids. The same message that is part of the problem in the first place.

How hilarious that Thunberg’s assessment of the climate situation is only inaccurate because it’s missing the white supremacy argument, and not that it’s rooted in junk science and alarmism.

No disrespect to Young Greta, but a quick tutorial on “White Supremacy”…

INDIGENOUS PEOPLE HAVE BEEN WARNING EVERYONE ALL OVER THE GLOBE ABOUT “CLIMATE CHANGE” FOR DECADES!!

There is no mention of them now that this is mainstream. Just Greta…

It would seem those indigenous activists didn’t have well-connected, spotlight-hungry parents like Greta.

There were many more examples of such nonsense available for the picking, but I already have a headache from reading these.

How infuriating it must be to commit oneself to the uphill trudge toward perfect, progressive enlightenment only to find that you just ain’t woke enough yet.