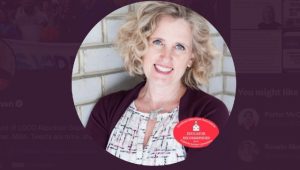 A radical left-wing member of the Loudon County Board of Supervisors has labeled parents that have come together in order to protest against the school district’s current attitude toward sexual assault and their alleged support of students being taught Critical Race Theory in the classroom, “alt-right,” which did not go over well at all, as both black and Jewish parents are now fighting back.

The supervisor in question, Juli Briskman, who is currently a member of the Loudon County Board of Supervisors, recently posted up a tweet where she gave a thank you to a group called, “Loudon 4 All,” for “a factual & thorough debunking of the alt-right FFS petitions. If they want to fight for schools they should support teacher pay increases, more mental health resources and ending the school to prison pipeline.”

TY ⁦@loudoun4all⁩ for a factual & thorough debunking of the alt-right FFS petitions.

If they want to fight for schools they should support teacher pay increases, more mental health resources and ending the school to prison pipeline. https://t.co/UKj9IfBmHM

Jewish Loudon County mother Elicia Brand, who is a volunteer with the group Fight for Schools, sat down with Fox News where she said, “As a Jewish American, I am completely offended. I take that as a personal affront. … I support Ian Prior and everything that he is doing for the schools and the parents in every way.”

Prior is currently serving as the Executive Director of Fight for Schools.

Brand, who has since established a group of her own called Army of Parents as a means of supporting Fight for Schools went on to add, “I know many people in the Fight for Schools organization and not one of them is alt-right, not one of them is far-right, not one of them is racist.” She slammed Briskman, asserting, “She is putting political ideology and the political agenda before the needs of the citizens of Loudoun County and she owes every one of us an apology.” She concluded, “To call us alt-right is a punch in the gut, a stab in the heart for all parents who fight for their children.”

A black father of four children, Joe Mobley, also said, “I think it’s absurd. It’s an ad-hominem. … Obviously, as a black dude it’s weird to be called a white nationalist.” Fox News added,  “He noted that Briskman launched her political career after publicly ‘flipping off’ the president at the time, Donald Trump.”

Prio chimed in, “Ms. Briskman’s false and defamatory statement is an attack on a diverse coalition of thousands of Loudoun County residents that are utilizing a legal process to remove school board members that have violated the law and their own code of conduct. The best thing Ms. Briskman could do, as an elected official, is publicly retract her statement and cease and desist from regularly attacking her constituents on social media. … But we aren’t holding our breath.”

“On Tuesday, Fight for Schools announced it had collected more than 2,000 signatures to remove the board chair Brenda Sheridan citing reasons including neglect of duty, misuse of office and incompetence in the performance of her duties.  The organization also compiled enough signatures to mount legal challenges to oust three other board members, Board Vice-Chair Atoosa Reaser, Ian Serotkin of the Blue Ridge District, and at-large member Denise Corbo,” The Daily Mail reported.

“The petition effort began earlier this year, after reports emerged that members of a Facebook group called ‘Anti-Racist Parents of Loudoun County’ had compiled a list of outspoken conservatives and opponents of critical race theory in order to track, hack, and ‘doxx’ them,” Fox News noted.

Here are a few more of Briskman’s thoughts and opinions to give you a fuller picture of where she stands on current issues:

More guns do NOT make us safer. They make us decidedly less safe. https://t.co/PMBlGl7RVq

"it wasn’t just fear that convinced Rittenhouse that he had a right, a responsibility even, to take a gun into the middle of unrest that didn’t directly affect him. It was … an entitlement to make and uphold the rules, to make America great again." https://t.co/RuvEpJjXlt

“It’s gonna happen so it outta be safe, legal and accessible. We will not go back to the alley. I mean the last thing anyone wants is a bunch of dead clowns in a dark alley.” https://t.co/zEsakfCYS1