The Super Bowl Proves It: Winning is For Losers 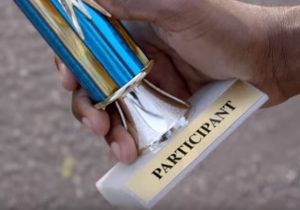 Millions of Americans called in sick this week, hung over and exhausted from this weekend’s annual celebration of testosterone and toxic masculinity. Literally billions of dollars were spent on a bunch of muscle-bound Neanderthals smashing their egos together so everybody could whose is bigger. Even this year’s half-time show, anticipated by so many, contributed to the carnival-like worship of the oppression genetically programmed into our society and the patriarchy that supports it.

Football games begin much like a death match between gladiators in ancient Rome, another society dedicated to the suppression of women, minorities, and immigrants. To give the Romans credit, however, they did make a sport of feeding Christians to the lions in their coliseum, suggesting they might have eventually contributed something useful to the world if they had been around long enough.  Anyway, players and coaches ran out last weekend to a bunch of fans stomping their feet and screaming their lungs out, bloodlust thick in the air.

Then, for two-and-a-half hours, America sat enthralled as that devastating by-product of toxic masculinity, competition, poisoned our minds and ruined our children. In addition to the physical harm football causes – really, why should any human being EVER strike another – the fame-whores of professional sports perpetrate two heinous and irredeemable crimes upon our children (and yes, they are all OUR children).

First, they infect the youngest and most vulnerable among us with a lust for competition. Granted, that doesn’t sound so bad at first, and the conservative hate-mongers insist it’s healthy. What competition among children does, however, is trick them into believing that some people are better than others. It gives them the idea, in their formative stage, that everyone is not equal in everything, and those who work harder deserve more. The dangers of this kind of thinking are nearly unimaginable.

Some years, the half-time show makes the whole fertility festival worth watching. That wasn’t the case this year, however. Justin Timberlake only added to the degradation of those groups important enough to be championed by the left. To begin with, why would an event as big as the Super Bowl halftime show feature a white, heterosexual male? They already enjoy every single advantage afforded the human race, so why did Justin Timberlake get to flaunt his privilege?

Then, just to rub his perceived superiority in our faces, the dancers who initially followed him onto the stage were dressed as males! The female dancers came out last. Even worse, only those two sexes were represented on a platform seen around the world. And what did that symbol of privilege and oppression sing about? Heterosexual lust, of course. The entire event was intentionally designed to demean and hold down anyone who doesn’t look and act like Justin Timberlake and those who identify like him.

Professional sports, as they are played and presented today, destroy any possibility of an enlightened, tolerant society. They mislead, sometimes irreversibly, our children into believing that those who work hard are more deserving of success than those who only dream of greatness. In other words, organized competition steeps them in the tenets of racism, patriarchy, and that scourge of the free world, capitalism. But hope remains, even if it is but a faint glimmer just across the horizon.

In the utopian society Hillary Clinton will implement as soon as the orange-haired monster is jailed and she ascends the throne…takes the oath of office…competition will be replaced with perfect harmony and respect for all who swear fealty to The Agenda. Instead of fielding actual balls, which not only cause injury but lead many participants to experience feelings of insecurity and inadequacy, players will collectively use their imaginations.

Can anyone really grasp the world we could create if, instead of blood-thirsty and toxic men each trying to be the best, our children saw adults of all sexes cooperating on the field of play, communicating and helping each other achieve their vision of equality. Imagine where we could go as a society if sports were used to encourage equal results instead of competition. Eliminating the score from professional sports could achieve that. And picture, if you can, how inspiring the post-game show would be for everyone, not just the winning team and their fans, if every single participant got a trophy.

Because of the profound effect these changes would have on our society, it will also be necessary to require attendance at local games. That way, each team will be loved equally. Ticket prices will, of course, be regulated based on population, so every organization enjoys equal income, as well. Also, rosters can be changed weekly so every single person gets the chance to play on the big stage.

That’s exciting stuff, right there. Kind of overwhelming, even. Heck, I might even leave my safe space if they let me win a Super Bowl trophy.