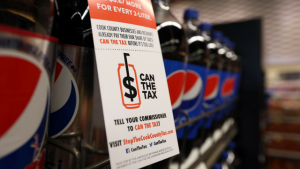 Left-wing politicians have been pushing the idea of a “soda tax” to lower healthcare costs for years now, because if you’re on the left, taxes are always your first solution to fixing anything, right?

Ban and tax all the things!

It turns out, however, that those hardest hit by increased taxes on high-sugar beverages like soda are middle- and lower-income families, which just adds to the very long list of Democrat policies that hurt the people they claim to help.

The Washington Free Beacon has the story:

Taxes levied per ounce on sugary drinks by Democrats in Berkeley, Philadelphia, and Seattle are even more regressive, according to the study. The middle class would pay the most if Congress passed a nationwide soda tax, as two-thirds of its revenue would come from those earning between $20,000 and $100,000.

If an excise tax per fluid ounces were to be enacted, households earning less than $100,000 would pay 78 percent of the tax.

“Sugar-sweetened beverage taxes theoretically offer the potential for reducing externality health-care costs stemming from excessive sugar consumption, and in this way they may raise the prospect of efficiency gains by signaling to consumers these higher social costs,” according to the study. “However, these taxes also raise equity concerns to the extent these goods represent a disproportionate share of the consumption among lower-income households.”

The entire concept of a soda tax runs contrary to the founding principles of our country.

To begin with, it’s impossible not to draw the comparison between a soda tax and the fateful tea tax imposed by the British circa 1776. We all remember how that went. Americans don’t take too kindly to high taxes on their favorite beverages, no matter how unhealthy they may be.

Shrouding a soda tax with a perceived effort to make Americans healthier doesn’t change the fact that it is clearly just another attempt to hike up the price of goods and fund our ever-growing federal government. Given the feds’ track record with health care and efficiency in using our tax dollars, it’s hard to imagine these taxes are being used effectively at all.

But at the end of the day, American consumers should have the basic liberty to make their own choices. Soda is pretty bad for you and is linked to obesity, diabetes, dental problems, hypertension, and a host of other medical problems.

It is not, however, the Federal government’s responsibility to teach us how to take care of ourselves. That’s totally on us. A soda tax just slaps a Band-Aid on the gaping bullet wound that is our incredibly broken health care system. Rather than sensible reform, it’s easier to just find more things to tax.

And like most left-wing policies, it will just hurt the poor and middle classes. Go figure. Nothing Democrats do every really help regular Americans anyway.