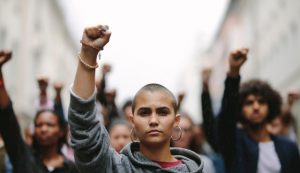 A professor who teaches at the University of Vermont is now coming under heavy fire from students who are demanding that he step down from his post after he uploaded a video to YouTube talking about the growing anti-white sentiment that is growing on campus.

This is the nuttiness you are paying for when you write that check for your kid’s college tuition. Makes you sick, right?

Aaron Kindsvatter, a professor of counseling at UV’s College of Education and Social Services, posted a video called “Racism and the Secular Religion at the University of Vermont.” The video was nine minutes long and received 15,000 views, Vermont-based publication Seven Days reported.

In the video, Kindsvatter said he “first heard of whiteness” after a faculty colleague “offered to help [him] with it, like it was some kind of disease,” the outlet reported. Kindsvatter added that it “was a dehumanizing experience.”

“I never expected the concept of whiteness to endure, because it’s so obviously discriminatory,” Kindsvatter said in the video. “But not only has this ideology endured within the university, it has flourished.”

Kindsvatter then mentioned a July teach-in put on by UVM’s Division of Diversity, Equity, and Inclusion, which was called “Turning the Conversation to Whiteness.” Kindsvatter said the during the teach-in, “a number of vague social ills were associated in a causal way with people of a particular race.”

“If this policy is passed, in speaking up against what many would consider to be an anti-racist teaching, but one that makes a causal connection between people of that particular race and vaguely defined societal ills, I would be considered, in a way that is consistent with program policy… a racist,” Kindsvatter warned in the video.

The UVM Sisters of Color then put together a Change.org petition that demanded Kindsvatter resign due to the concerns he brought up in the video, claiming the things he said put students of color in danger.

“Having conversations around anti-racism and acknowledging the role of whiteness in systemic racism has been supported by every department on campus, as it is rooted in our campus’ common ground values. Speaking out against this work is harmful when you cannot hold yourself accountable and begin practicing good allyship. This video is particularly harmful towards the community of color through his calls to organize. When identity groups have been repeatedly targeted in dangerous manners on campus, this rhetoric is concerning to say the least,” the petition says.

“Professor Aaron Kindsvatter’s “i-don’t-see-race” mentality has been proven to be harmful towards any kind of societal racial justice and for that reason we are demanding his immediate resignation. A UVM faculty member, especially one who teaches courses in counseling, should not hold this ideology employed by white supremesists. The freedom of free thought is not what is being restricted here, it’s the fact that Aaron Kindsvatter is using his position of power and authority as a platform for spewing these ideologies,” it added.

Folks, college is supposed to be a place where you can expand your thinking and have your ideas challenged in a fruitful and passionate debate, a meeting of different minds.

That is apparently not the case anymore, thanks to political correctness which liberals have pushed to the maximum over the last several decades.

A man is now being pressured to quit his job after making comments against racism. What a bizarre time to be alive.