Students Vote for Chick-fil-A on Campus. University Says No Way. Because, Inclusion or Something. 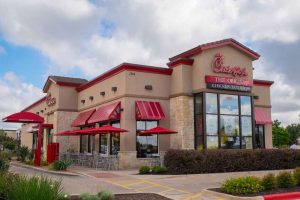 It’s pretty funny to see the lengths some liberals will go to to remind the world they can’t get over the fact that the dude who owns Chick-fil-A likes the Bible.

It’s not like the company routinely donates to Westboro Baptist, or bans gay people from eating there.

It’s not even like they routinely apologize and advocate for Sharia law, which stipulates that homosexuals be imprisoned or executed (you know, like a founder of the Women’s March or something).

Come to think of it, Chick-fil-A doesn’t really do much of anything at all except sell really good chicken and refuse to open on the Lord’s Day.

Liberals, on the other hand, whine about Chick-fil-A constantly.

And, in the case of a private university in New Jersey, totally ignore the fast food preferences of the majority of the student body to make some sort of statement about inclusion and avoiding risk and whatnot.

ider University in New Jersey sent a survey to students during the spring semester, asking them which restaurants they would like to see the school bring on campus. But when it became clear that Chick-Fil-A was the students’ top choice, the college disregarded the results of the survey.

The school will not bring the popular fast food chain to campus because “their corporate values have not sufficiently progressed enough to align with those of Rider,” according to a Nov. 1 email sent to Rider students and obtained by Campus Reform. The school went on to clarify that the decision was in an effort to “promote…inclusion for all people.”

Wouldn’t, you know, including the opinions of the students who voted for Chick-fil-A sort of be inclusive?

Isn’t ignoring the solicited perspective of students whose parents pay good money to send their kids there a lot more exclusionary than being a chicken chain owned by a guy who once had the audacity to share his personal religious convictions about homosexuality to a Christian audience, like five years ago?