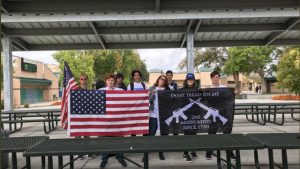 The vast majority of children attending public schools today are not receiving a quality education, but are instead being indoctrinated so deeply with progressive doctrine and ideology they’re willing to protest and demand the government take away their God-given rights.

This is precisely what happened with the whole March For Our Lives movement that launched in the wake of the school shooting in Parkland, Florida earlier this year. A total of 17 people died in the incident.

Many students responded by holding a national walkout during school hours, hoping to raise awareness for the “need for gun control,” wanting politicians to take note of their feelings on the matter and take action.

Yes, these poor impressionable young minds actually protested to give the government more power and to take away their Second Amendment rights. Sure, they might say they don’t want to remove the right to bear arms, just limit it some, but since when has the government ever respected boundaries?

While such actions by our nation’s young people might leave folk with a feeling of impending doom for the future of America, have no fear.

There’s still a sizable remnant of our youth who understand the principles that make this country great and are willing to take a bold stand to defend liberty.

Hundreds of students from dozens of states held another walkout on Wednesday, however this time it was in favor of the Second Amendment instead of against it.

This is guaranteed to put a smile on any patriot’s face:

About 100 students in Columbia Falls, Montana are walking out for #StandForTheSecond supporting #2A. #mtnews pic.twitter.com/NSkjuF2MZQ

The #StandForTheSecond event was organized by Carlsbad, New Mexico High School student Will Riley, who also had help from the Tea Party Patriots organization in planning the protest.

It’s comforting to know that liberals haven’t been able to brainwash all of the next generation and these young patriots certainly give us old-timers a reason to rejoice and be thankful, knowing that the torch of liberty has a new crop of defenders.