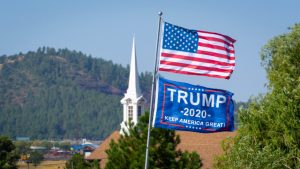 A 16-year-old student doing learning at home through a virtual classroom was asked to leave his high school chemistry class unless he took down a Trump campaign flag that was hanging on his wall behind him in his bedroom.

The young man’s mother spoke to ABC 10 about the incident, stating that he left the Zoom meeting that was held for the Colusa High School chemistry class before he could be booted.

“I made it very clear that when he repositioned the camera, either the flag needed to be removed or not in the background or she was kicking him out, and she gave him 15 seconds,” she told the media.

ABC10 noted, “Another student in the classroom took a recording of the virtual classroom as the teacher counted to 15.” The boy’s mother added, “At first I was furious,” noting that the teacher had since apologized. She continued, “With the distance learning we are all forced to do because of the new color chart, the school district has not addressed the students’ rights in their own home to the teachers or to us as parents.”

The Colusa Unified School District student handbook states: “The Governing Board believes that free inquiry and exchange of ideas are essential parts of a democratic education. The Board respects students’ rights to express ideas and opinions, take stands on issues, and support causes, even when such speech is controversial or unpopular.”

“Students shall have the right to exercise freedom of speech and of the press including, but not limited to, the use of bulletin boards; the distribution of printed materials or petitions; the wearing of buttons, badges, or insignia, and the right of expression in official publication,” the student handbook continues. “Student expression on school or Internet websites and online media shall generally be afforded the same protections as in print media. Students’ freedom of expression shall be limited only as allowed by Education Code 48707, 48950, and other applicable state and federal laws.”

The bottom line here is this wasn’t even a legitimate classroom. This was a student’s private living space. The jurisdiction of the school system ends outside of the physical classroom. They cannot and should not ever tell a kid what he can have on his own bedroom walls. Especially since showing support for the president is a matter protected by the First Amendment.

Schools are mostly provided for through tax dollars, making them a government-run entity. For the school system to say this kid can’t have his flag is a pure violation of the First Amendment. Clear cut.

The teacher should be reprimanded and/or terminated from their teaching position if they are not going to be able to support the First Amendment rights of students.