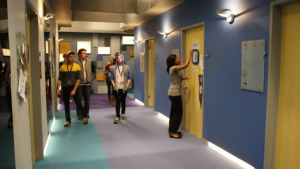 They claim to want to dismantle “the patriarchy”, and yet their delicate orthodoxy of what you can and cannot say about rape seems to almost, well, encourage rape.

Here’s what you can say about rape, according to feminists: “Teach men not to rape.”

OK…rape is illegal. Rape is viewed as a particularly heinous crime in all Western cultures. Rape is generally discouraged in all civilized societies. Rape is literally never portrayed as positive in movies, television shows, or celebrated literature. People who teach men to rape are likely to end up in prison themselves; if that’s actually happening anywhere.

So, teach men not to rape, got it. Check. Donezo.

Here’s what you can’t say about rape, according to feminists: “Here’s how to avoid being raped.”

No, no, no, you simply cannot instruct a young lady–or even a gender-neutral student body for that matter–on anything that might help prevent them from being put in a situation where they would be vulnerable to sexual assault! That is victim shaming!!!

Do you see why this is frustrating?

So, here’s the story: Gisela Factora, a student editor at Hofstra University’s The Hofstra Chronicle, recently penned a very angry objection to a university-wide email that had been sent out in response to a sexual assault that happened in a dorm room.

Anyway, here is what the email said:

It has been reported to Public Safety that a residential student was assaulted in their room by someone they had recently met. Please be careful about inviting people you don’t know well to your residence hall room. Call Public Safety immediately at 516-463-6789 if you or someone you know needs assistance and follow all guest policies as outlined in the Guide to Pride and Living Factor.

In Factora’s eyes, two terrible offenses were committed: in addition to the carnal sin of victim shaming, there was also….brace yourself…no trigger warning.

Factora, in her angry (and might we say, very cleverly titled) op-ed, “Public not-so-Safety” (get it?), argues that sending the email under the subject line “Hofstra University Safety Alert” failed to properly trigger students as to the nature of the email: sexual assault.

“Opening an email like this, which begins with a mention of an assault with no prior warning, could potentially be triggering to survivors of sexual assault, especially on-campus sexual assault,” she explains.

Next, suggesting students do not invite strangers into their dorm rooms, in Factora’s eyes, is not helpful, but rather, totally super victim shaming.

“Then there’s that second sentence, which is the real kicker. First of all, what is Public Safety doing to apprehend the perpetrator, if anything? Second of all, if a student reports an assault, the appropriate response is not to basically blame the student for inviting someone into their room, even if that’s someone they just met. And it’s especially inappropriate to do so in an email blast,” she says.

So, let’s get this straight. Factora seems more upset by the response of the Public Safety Department than she does by the actual assault.

Sure, she wonders if the perpetrator has been apprehended, which is a valid question. But in the same paragraph, she criticizes the Public Safety Department for their “victim shaming” general suggestion for all students that do nothing to betray the identity of the victim, and she wants explicit details of the case? Did it occur to her that perhaps the PSD was trying to protect the identity of the victim?

At the end of the day, Factora has whined about a lot of things, but never once has she denounced the heinous crimes of sexual assault and rape. She herself is shifting the blame away from the assailant and towards the people who are actually offering constructive advice as to how to not be a victim themselves.

There is no reasoning with these people.

Someone might want to tell Factora instead of putting all her energy into trigger warnings and blaming victim blaming, she should probably just carry a gun.

That’s the best rape deterrent there is.