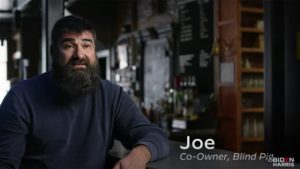 Democratic presidential nominee Joe Biden and his campaign are coming under heavy fire after they released a TV ad last week that depicts a Michigan bar owner struggling to keep his doors open during the coronavirus pandemic.

The ad neglects to inform you that the man is actually a fairly wealthy tech investor who has made some rather sizable contributions to Biden’s presidential campaign. He’s also a big fan of Michigan Gov. Gretchen Whitmer and her stay-at-home orders which have had devastating effects on businesses.

The ad, which was posted to YouTube on Thursday and aired Sunday on CBS during NFL games, features Joe Malcoun, who is listed as the “co-owner” of The Blind Pig, a once-popular bar and music venue in Ann Arbor, Mich. Malcoun blamed his business’ economic downturn on President Trump’s COVID-19 response.

“For 50 years, The Blind Pig has been open and crowded – but right now it’s an empty room,” he says in the one-minute ad, showing the empty venue. “This is the reality of Trump’s COVID response.”

“We don’t know how much longer we can survive not having any revenue. A lot of restaurants, bars that have been mainstays for years will not make it through this. This is Donald Trump’s economy,” he continued. “There’s no plan, you don’t know how to move forward. It makes me so angry. My only hope for my family and this business and my community is that Joe Biden wins this election. That’s the kind of person we need.”

The problem here, of course, is that Malcoun doesn’t disclose the fact that if the Blind Pig closes up shop, he’ll not be in any financial trouble, due to the fact he’s an “angel investor” in various tech companies.

Back in April, Malcoun tweeted out some serious praise for Whitmer stating that she was “doing it right” keeping the state’s stay-at-home orders going, which of course, prompted backlash and counterprotests.

Keep saying it with me: this means @GovWhitmer is doing it right.

White men with fragile egos will always be intimidated by smart powerful woman. And they should be. https://t.co/7B36Ph36YK

Just earlier this month, the Michigan Supreme Court struck down Whitmer’s orders to keep on extending the coronavirus state-of-emergency orders without legislative approval. This order was supposed to expire on April 30, but the Michigan governor used executive powers to keep it going.

Malcoun inherited a sizable chunk of cash through his wife’s grandfather and then launched CKM Capital Partners back in 2013. He’s also served as the CEO a customer relationship management software company known as Nutshell.

Again, the bottom line here is that this man is not hurting for money and the ad he appeared in made it seem as if he would be hard up if the bar shut down. It’s deceptive and pretty sleazy.