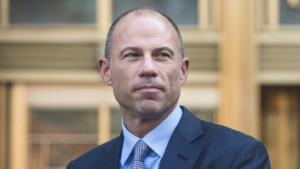 Recently, Maxine Waters, responding to threats made to her after she openly called for members of the Trump administration to be harassed in the street, told those who wanted to shoot her “you better shoot straight, there’s nothing like a wounded animal.”

Clearly, 81-year-old Auntie Maxine was just saying stuff, but she inadvertently made a very true statement about the state of her party.

2016 so severely wounded Democrats, that they’re fighting like crazy to hang on to their sphere of influence, even as they hemorrhage voters and alienate everyone with their increasingly crazy rhetoric.

Like a wounded animal, they’re only hurting themselves by continuing to fight.

Case and point: their adoration for adult film star Stormy Daniels and her camera-addicted lawyer, Michael Avenatti. Daniels, who claims she was paid off in 2016 to keep quiet about an affair she had with the President in 2005, is clearly just a money-grubbing opportunist who a) performs sexual acts for money, b) had an affair with a married man, c) happily accepted the hush money at first and d) saw a career-boosting opportunity after the election and took it.

Avenatti, who was famously interviewed a total of 59 times in two months by his buddies over at CNN, was definitely the perfect person to represent her.

Both these “heroes” knew the left would lap up anything and everything they had to say, and that they’d both have the chance at exponentially more fame and success than they would have had otherwise.

The left saw the opportunity to get a “Trump’s Monica” in Daniels, so it was a match made in heaven.

And now, born out of the Democrat’s bitterness of losing in 2016 and Avenatti’s taste for attention, the latter is considering a 2020 bid.

Never has a desire to run for president been based on so little.

“IF (big) [Trump] seeks re-election, I will run, but only if I think that there is no other candidate in the race that has a REAL chance at beating him. We can’t relive 2016. I love this country, our values and our people too much to sit by while they are destroyed. #FightClub #Basta” he tweeted on Independence Day.

The faux humility is painful–not only is Trump obviously running in 2020, he’s already campaigning.

IF (big) he seeks re-election, I will run, but only if I think that there is no other candidate in the race that has a REAL chance at beating him. We can't relive 2016. I love this country, our values and our people too much to sit by while they are destroyed. #FightClub #Basta

The irony here, of course, is that while he’s more than happy to tow the Democrat party line when it comes to narrative (just take a quick look at his Twitter feed to see his obedient parroting of every major left-wing talking point), he also, like so many Democrats right now, can’t even hide the fact that their 2020 prospects are dismal.

But hey, I guess it’d be better than Stormy Daniels 2020.