Stormy Daniels’ Lawyer is Now Involved in the Kavanaugh Accusations Because Why Not? 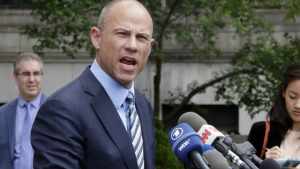 You know who was missing from this whole Kavanaugh scandal?

That’s at least what 2020 hopeful Michael Avenatti is thinking, the man who made a name for himself camping out in CNN’s green room for over a month last Spring speaking on behalf of his client, adult film actress Stormy Daniels, known for claiming to have schtupped the President and now like, wants money for it or something.

On Sunday, he announced he has a new client: a woman with credible claims against Kavanaugh:

I represent a woman with credible information regarding Judge Kavanaugh and Mark Judge. We will be demanding the opportunity to present testimony to the committee and will likewise be demanding that Judge and others be subpoenaed to testify. The nomination must be withdrawn.

Yes, he’s inserted himself right into the middle of what the media and the Democrats are desperately hoping is an epic sex scandal but that unfortunately, despite more women coming forward, still has no witnesses and no evidence whatsoever.

That is…there was no evidence until Michael Avenatti got involved. Now he is saying there’s a secret code–you read that right–in Kavanaugh’s yearbook that will expose him for all his dirty crimes, save Congress, and insert Hillary Clinton right in the oval office, just like 2016 never happened.

He’s the hero Democrats have been waiting for!

“Brett Kavanaugh must also be asked about this entry in his yearbook: ‘FFFFFFFourth of July,’” Avenatti tweeted.

Why must Kavanaugh be asked about what could be a high school student’s attempt to be edgy or cool or excessive in a yearbook quote?

Because all of those F’s, apparently, represent the clandestine motto of sexual assailants everywhere.

“We believe that this stands for: Find them, French them, Feel them, Finger them, F— them, Forget them,” Avenatti claimed.

Dude, first of all, that’s just disgusting and you are lowering every single person in the country’s IQ and shaming our entire nation globally just by tweeting that.

Second of all, even if Kavanaugh had put that in his yearbook and he actually meant it, that’s still pretty far from hardcore proof he literally attempted to rape a woman.

]If the Democrats weren’t so effective at turning this entire thing into a sideshow, they might actually be more convincing at what seems painfully likely to be a messy character assassination right before vital midterms when Dems are clearly sweating and desperate to gain votes.

But Aventatti just had to get involved.