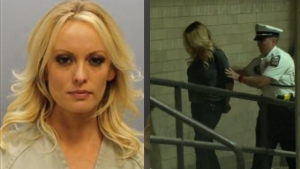 Stormy Daniels now has a whole new reason to brand herself an American hero.

Not only is the adult film star the center of a self-created scandal in which she allegedly took hundreds of thousands of dollars to keep quiet about an affair she had with the President in 2005, but now she’s being persecuted for it.

That’s right folks, the President has unleashed his minions in the Columbus Police Department to have the star arrested for no good reason!

Stormy Daniels is now a political prisoner of Ohio’s blatantly biased laws that prevent adult entertainers from touching their patrons.

Fox News reports that “Daniels was topless when she ‘knowingly’ touched a female Columbus police officer’s buttocks, placed her hands on the officer’s breast and then put her chest in the officer’s face while ‘on the premise of a sexually oriented business,’ according to charging documents from the Franklin County Municipal Court obtained by WBNS.”

Just rcvd word that my client @StormyDaniels was arrested in Columbus Ohio whole performing the same act she has performed across the nation at nearly a hundred strip clubs. This was a setup & politically motivated. It reeks of desperation. We will fight all bogus charges. #Basta

She was arrested for allegedly allowing a customer to touch her while on stage in a non sexual manner! Are you kidding me? They are devoting law enforcement resources to sting operations for this? There has to be higher priorities!!! #SetUp #Basta

This had to have been good news on some level for Daniels and Avenatti, who had been sadly absent from the news cycle in recent months. One gets used to being the favorite topic of media, you know?

And I’m sure although no one, least of all the President, had been remotely bothered by their frequent press appearances especially as they began to fade away from the spotlight, the Federal government had remained dedicated to covering up the affair the President allegedly had over a decade before becoming President, despite the many, many, many more important issues it’s facing like, oh I don’t know, Lisa Page bailing from her Congressional Hearing or her lover, Peter Strzok, an FBI agent who was busted basically admitting to trying to affect the outcome of the 2016 election, who will be facing the House Judiciary Committee today.

Daniels was clearly the piece of the puzzle that needed to be taken out.