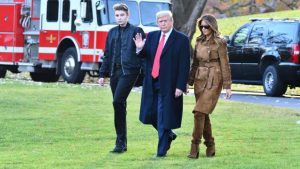 I know what you’re thinking. This guy must be desperate to grab a little cultural relevance to help expand his career beyond talking about food. That’s probably true. However, we all know that when it comes to classless attacks and assaults on the children of politicians, liberals are always chomping at the bit, so this isn’t at all shocking.

Here’s what Grisham had to say, via The Daily Caller:

“Sadly we continue to see inappropriate and insensitive comments about the President’s son [Barron Trump],” Grisham shared in a statement Monday to the Daily Caller.

“As with every other Administration, a minor child should be off limits and allowed to grow up with no judgment or hate from strangers and the media,” she added.

Grisham’s comments come following a tweet from Henson on Father’s Day questioning whether President Donald Trump is Barron’s father. The post was noted by The Daily Wire.

“I hope Barron [Trump] gets to spend today with whoever his dad is.”

All of this nonsense comes hot on the heels of new reports about a book soon to come from WaPo reporter Mary Jordan, who is claiming that Melania Trump was reluctant to move from NYC to the White House after Trump won the presidency and used the delay in order to renegotiate her prenuptial agreement.

Grisham responded by saying the book “belongs on the fiction genre.”

It’s not enough the mainstream media spends all of its time trying to craft an anti-Trump narrative out of anything they can get their hands on, they have to go after his family non-stop too? Do these people really have this much free time on their hands?

Aren’t they supposed to be working for a living or something? How in the world can they afford this much time to waste?