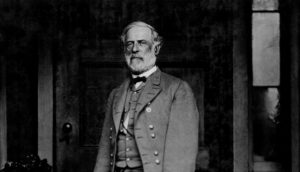 The statue of Robert E. Lee in the U.S. Capitol was removed overnight at the request of Virginia Gov. Ralph Northam, a man whose claim to fame is that he wore black face at a party, in what likely amounts to an attempt to make up for his past transgressions.

The statue was one among two dozen Confederate figures that are on display in the Capitol. Many of these works of art were dedicated over a century ago. Northam, who is a Democrat, promised back in June that he would work toward removing the statue from the building. The state of Virginia gave the statue to the Capitol back in 1909.

Each state commissions two statues to remain on display in the building. The bronze Lee statue was located on the first floor in an area known as the crypt.

Speaker Nancy Pelosi has called for the removal of all of the Capitol’s statues and portraits portraying Confederate officers, but the bipartisan committee of lawmakers overseeing the National Statuary Hall collection blocked the move and said only states have the authority to recall statues they commissioned.

This is another example of the left attempting to erase important parts of our history. It’s understandable that so many folks don’t like Robert E. Lee, considering he was with the Confederacy and was defending slavery, among other principles.

However, we can’t wash away our history. The good or the bad. We need to keep reminding ourselves of the good, the bad, and the ugly, so that we never repeat those mistakes again. Ever.

Statues and other commissioned pieces of art help us to do that.