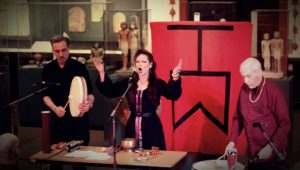 We’re living very strange times these days, and nothing makes that more clear than what happened during the opening of a state government meeting in Alaska, where things were kicked off with a “Hail Satan” prayer.

A member of the Satanic Temple recently won the right to deliver the invocation, and the move did not at all sit well with about a dozen officials and attendees. These folks wanted no part of this junk and walked out the door.

Here’s more via The Daily Wire:

The invocation was the first given by the Satanic Temple since the Kenai Peninsula Borough — 75 miles south of Anchorage — changed a policy in November after the Alaska Superior Court said that policy violated the state’s constitution’s establishment clause. The new policy allows for anyone in the borough to offer an invocation, no matter their religion.

In her invocation, Iris Fontana, who is a member of the Satanic Temple and brought a lawsuit against the borough to change the policy, called the room to be present, “and for attendees to clear their minds,” the Peninsula Clarion newspaper reported.

“She asked listeners to embrace the impulse to eat from the tree of knowledge of good and evil. ‘Let us demand that humans be judged for their actions,’ she said,” the Clarion reported.

“That which will not bend, must break, and that which can be destroyed by truth should never be spared as demise. It is done, hail Satan,” Fontana said, Kenai radio station KSRM reported.

A group of about 40 individuals protested the Satanic Temple invocation, some holding signs adorned with slogans like “reject Satan and his works,” and “know Jesus and his love,” as they held their demonstration outside the government building.

Assembly members Norm Blakely and Paul Fischer, along with borough Mayor Charlie Pierce were among the folks who walked out.

This just goes to show how morally bankrupt our current culture has really become. When folks are willing to hail the devil as a means of trying to be cool and edgy, as a means of fighting against Christianity, largely because they want to force everyone to accept their despicable lifestyles, you know you’re scraping the bottom of the barrel when it comes to morality.

Let’s hope that folks in the Christian church will rise up to fight against this using the love of God made clear to us all in the gospel of Jesus Christ.