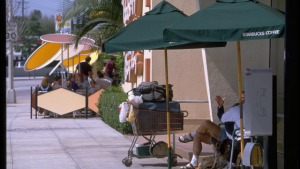 Starbucks has received national news this month after the manager of a Philadelphia Starbucks called the police on two black men who were sitting in the establishment without having purchased anything.

Instead of suck up the bad publicity for the sake of publicity, CEO Howard Schultz went all-in and instituted a nationwide policy for all Starbucks locations that bathrooms could be used by anyone, not just paying customers.

“We don’t want to become a public bathroom, but we’re going to make the right decision 100% of the time and give people the key, because we don’t want anyone at Starbucks to feel as if we are not giving access to use the bathroom,” said Schultz.

Translation=I will literally burn my business to the ground before I’ll ever allow anyone to think of me as racist.

This is how insane political correctness and race-baiting has become, people!

The Daily Wire reports that while some Starbucks employees welcome the change, legitimate concerns are being raised about what is nothing less than an idiotic change (my words, not the Daily Wire’s).

“You could end up having a squatters problem where you just have people coming and staying. I mean if they are going to do that they need to limit how long people can stay in there,” said one employee, while another made the very obvious point “it will be a homeless camp. At least we won’t have to deal with them on the street.”

Right–this is sure bound to clear up at least a few city blocks in San Francisco, where the homeless population is through the roof.

While the City By the Bay has always had a noteworthy homeless population, it’s exploded in recent years, with some 7,500 homeless reported in a city of merely 800,000. Residents report that people, needles, and feces literally litter the street in many neighborhoods.

All these people in such a densely populated city are constantly on the lookout for anywhere that will let them use facilities and loiter without consequence. While the city is jam-packed with snobby foodie coffee shops other than Starbucks, there are still a whopping 82 individual Starbucks locations alone within the 49 square miles of city limits.

So despite the fact that the Philadelphia Starbucks manager was perfectly justified in calling the police on two customers who refused to leave her location, regardless of skin color, and certainly would have happily served many other customers of color, Schultz is actually willing to open up his 82 (no doubt lucrative) Starbucks locations in San Francisco, as well as Starbucks locations across the country in areas with high homeless populations, for loiterers galore…just to virtue signal that his business isn’t racist.

This is exactly the kind of fear the fascist political correctness police force want us to live under.