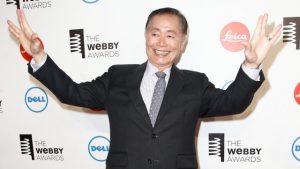 Washed up “Star Trek” actor, George Takei, is a screaming, raging liberal. The kind that has blood shooting out of his eyes, his…whatever — wink, wink — and has a well earned reputation for spouting off at the mouth with hateful rhetoric.

Apparently, the oh-so-classy Takei is hoping that Sen. Marco Rubio has an allergic reaction to the COVID-19 vaccine he recently received.

Gee, look at all that tolerance.

Rubio took to Twitter on Saturday, posting a photo declaring that he’s so confident in the vaccine he took it himself. On Sunday, Takei responded by wishing illness on the senator.

There are very, very few instances of known allergic reactions to the Covid-19 vaccine, but Marco Rubio has always thought of himself as one in a million so there’s still hope.

Many condemned the ‘Star Trek” actor for wishing sickness on Rubio:

This is psychotic. We want everyone to take this vaccine and be in good health, especially those who are setting the right example by getting it. That includes @marcorubio. Seriously, seek help because this is not a normal reaction to seeing someone get a vaccine.

You can strongly disagree with someones policies without wishing them a painful death.

It's actually even more effective in convincing the world that your argument is stronger.

It's sad that this has to be said periodically on Twitter, but here we are nevertheless.

C'mon man. You're better than this.

Man, you people are terrible at the whole unity and healing stuff 🙄

I met you with my first wife at a Star Trek convention in Albuquerque in the early 90’s. Stood in line for over an hour for a meet and autographed photo. I thought you were very gracious. Spoke for maybe three or four minutes. I’m not so sure my impression was correct. Be better.

In a letter sent Thursday, Brian Monahan, attending physician of the U.S. Congress, urged members of the House and Senate to make vaccination appointments. They would be given priority before essential staff members, Politico reported. Vaccines have arrived at Walter Reed Medical Center over the past days for federal workers and officials, and thousands are designated for members of Congress.

Someone must have peed in Takei’s Cheerios this morning. Either that or he needs a Snickers because he’s being a bit of a crank.

Keep in mind, this is the same guy who admitted on Howard Stern’s show that he tried to force himself on other men, claiming he knew they “wanted it.”

Sickening behavior seems to run deep in his personality. Let’s hope he gets the help he needs.