Spotify CEO Responds To Employee Concerns Over Joe Rogan; It Isn’t What They Were Hoping To Hear 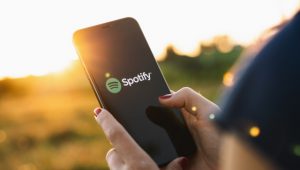 Spotify CEO Daniel Ek has responded to employee concerns over Joe Rogan by putting out a memo that says the company will not be parting ways with controversial podcast host Joe Rogan despite receiving massive backlash over his interviews with doctors who hold alternative views concerning the COVID vaccine and his previous use of racial slurs.

“While I strongly condemn what Joe has said and I agree with his decision to remove past episodes from our platform, I realize some will want more,” Ek went on to say in the message, according to a piece published by the Hollywood Reporter. “And I want to make one point very clear — I do not believe that silencing Joe is the answer.”

“We should have clear lines around content and take action when they are crossed, but canceling voices is a slippery slope. Looking at the issue more broadly, it’s critical thinking and open debate that powers real and necessary progress,” Ek added, going on to say he was “deeply sorry” for the impact that the controversy has had on Spotify’s work force.

“Rogan has faced recent backlash for hosting Drs. Robert Malone and Peter McCullough on his show, researchers who have presented information contradicting government sources on the nature and safety of the coronavirus vaccines. He now faces backlash for a video compilation circulating the internet of the comedian repeatedly using the N-word in conversation over the years,” according to a report from The Washington Examiner.

Ek notified employees previously that Rogan’s podcast is a key part of their strategy to achieve the company’s “bold ambitions.”

“If we want even a shot at achieving our bold ambitions, it will mean having content on Spotify that many of us may not be proud to be associated with,” Ek remarked in a leaked recording, according to a report from the Verge. “Not anything goes, but there will be opinions, ideas, and beliefs that we disagree with strongly and even makes us angry or sad.”