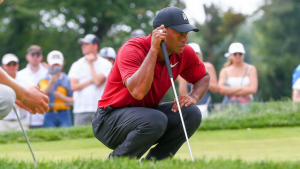 I’m not one of these people who thinks that celebrities’ opinions on politics are always null and void. They’re people who a lot of people listen to and, depending on their message, they can be inspiring and bring attention to issues that might not otherwise get noticed.

Just look at the way the antsy left treats Taylor Swift, as though keeping political views to herself is a failure. She’s a multi-million dollar pop star. Who cares.

When Elizabeth Warren or Ted Cruz appear on network news, they’re there for one thing: to talk about politics.

When an actress is walking down the red carpet, or a sports star has just finished an important game, why on earth do we ask them to pontificate on foreign policy, race relations, or border security? We want to know what they’re wearing or how they felt out there, period.

So it was certainly refreshing when a ginned up sportswriter tried to hook Tiger Woods, after finishing a 72-hole game, Woods just smiled and politely said, essentially, that he barely cared.

After his final round Sunday, sweat still pouring from his forehead, Woods was asked by a sports writer: “Your relationship with Donald Trump, how would you describe that personally and professionally?”

The writer followed up.

“At a time, especially 2018, I think a lot of people, especially people of color, immigrants feel threatened by him, by his policies. He’s thrown himself in sports debates in terms of race with [NBA player] LeBron James, with the [national] anthem. What do you say to people who might find it interesting, I guess, that you have a friendly relationship with him?”

Woods’ answer was perfect — exactly the answer all Americans, including limousine liberals in Hollywood, should give when asked.

The writer tried yet again.

“Do you have anything to say more broadly about the state, I guess, the discourse of race relations?”

“No,” Woods said with a slight smile. “I just finished 72 holes and I’m really hungry.”