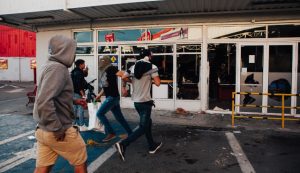 Well, looks like we have yet another case of liberal stupidity breaking out in California, which probably won’t surprise a single soul, but hey, it pays to be made aware of the idiocy being pushed by these people.

Apparently, according to the San Diego Police Department, what happened in the state of California over the weekend, when over $1 million in goods were stolen, was not “looting.”

Because they stated that calling it “looting” might be racist.

No, what took place was “organized robbery.”

Yes, this is for real. This is the world and age we live in, ladies and gentlemen.

And it seems that San Diego officials aren’t the only ones who feel this way.

“As the Bay Area grapples with a wave of seemingly organized smash and grab robberies this weekend, policing and journalism analysts are cautioning against the use of the term looting,” a report went on to state.

In San Francisco , Louis Vuitton and Burberry stores were burglarized and lost a significant amount of their product, the report said.

However, these events are not considered looting, according to the California Penal Code, which defines looting as “theft or burglary … during a ‘state of emergency,’ ‘local emergency,’ or ‘evacuation order’ resulting from an earthquake, fire, flood, riot or other natural or manmade disaster.”

According to Lorenzo Boyd, who is currently serving as a professor of criminal justice and community policing over at the University of New Haven, and is also a former police officer, calling what happened in California looting carries with a racist connotation.

“Looting is a term that we typically use when people of color or urban dwellers are doing something,” he went on to say. “We tend not to use that term for other people when they do the exact same thing.”

He then said that the general public should be careful about making a political connection between what happened this weekend with all of the “smash-and-grabs” and the verdict in the Kyle Rittenhouse case.

“These types of massive, organized smash-and-grabs were happening before the Rittenhouse situation because it happens cyclically,” he remarked. “It’s a false equivalency. It’s people trying to politicize crime.”

“People draw their own conclusions if the terminologies that you use are tethered to people’s understanding of how they have been used in the past,” he stated.