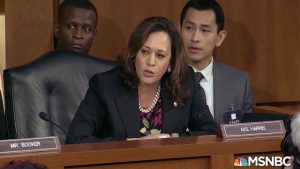 A spokesman for Democratic presidential candidate Sen. Kamala Harris has stated that her “Medicare For All” plan would indeed destroy the private health insurance market, despite the fact she’s been super shady involving the details of the plan and what it might entail.

Not that the majority of folks reading this publication need any additional reasons to not vote for Harris, but in case you did, this one’s a freebie.

Via The Daily Wire:

On Tuesday, my former Washington Examiner editor Phil Klein published an article that explained Harris’ MFA plan (which was actually proposed by Vermont Sen. Bernie Sanders) would prohibit private insurance from covering any benefits that would be covered by the government plan. Included in the list are common benefits like hospital services, prescription drug coverage, and pediatrics. It’s a pretty long list:

If your private insurance covers any of these benefits, Kamala Harris wants to kill it: https://t.co/9viZOkyk13 pic.twitter.com/gwppVE1YMu

As Klein wrote, Harris is not making the argument that people would lose their private coverage but gain better coverage from the government (which wouldn’t be possible anyway).

“Even if she’d face blowback for such a position, at least it would be intellectually consistent,” Klein wrote. “But that is not her current position. She claims that she opposes eliminating private coverage because there would still be a role for ‘supplemental’ plans.”

Based on the list provided by Klein that is pulled directly by the Sanders plan, which Harris backs, private insurance would only be able to cover things like plastic surgery, which The Washington Post’s fact-checker said doesn’t make a lot of sense.

After Klein tweeted out the list, Harris’ spokesman Ian Sams replied with this:

Because they'll be covered by everyone's Medicare for All?

Surely after the experience we’ve all had involving Obamacare, there’s not much in the way of explanation necessary for why Harris’ “Medicare For All” plan is an absolute nightmare in the making.

With the removal of the private insurance market, your healthcare will then be in the hands of the government, the same folks who run the DMV. Think about that for a second.

On top of that, with the government being deeply involved in healthcare, this means they can use their power and influence to control how people vote. Just imagine corrupt individuals have access to your medical records. Imagine you suddenly can’t get treatment based on the ways you’ve spoken out against the government.

It’s not as far-fetched as it may seem. Do some research into places like the UK and Canada that have socialized medicine. The stuff you’ll find will shock you.