Spike Lee Talks Down About Black Americans Voting Trump In 2020, Says They Are Drinking ‘The Orange Kool-Aid’ 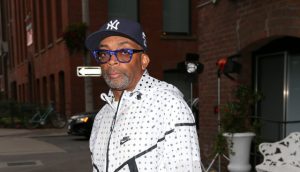 There’s a lot of hypocrisy in the land of Hollywood. Of course, the entire entertainment industry has become nothing more than a toilet bowl filled with the excrement we know lovingly as “progressive thought,” but sometimes, the comments made by certain folks of influence in the field, are so egregious and unsettling they need to be discussed.

After all, politics are downstream from culture. Change culture, change politics. Andrew Breitbart was a true genius, folks.

Director Spike Lee has predicted there will be a significant number of black Americans who will “drink the orange Kool-Aid” and vote for President Trump in 2020, something that he apparently frowns upon.

Isn’t it sad that Lee thinks other black Americans aren’t really and truly black if they dare to think for themselves and vote according to their own personally held values and beliefs? Isn’t that a sort of discrimination?

“Well, there are some negroes [laughs] that have drunk or will drink the orange Kool-Aid that’s coming in November, but it’s a very, very small percentage, and I needed — we needed that,” Lee said Tuesday.

Lee is currently putting together a film focused on the Vietnam War, which will also feature a black Trump supporter. What are the chances this will be a fair and balanced portrayal? Slim to none? Probably.

“My co-writer Ken Wilmott and I to put some tension in the group. These four brothers who grew up, who fought side-by-side in the Vietnam War and are coming back 40 some years later,” Lee explained. “So everybody can’t be — everybody went off after they came back from the war, so people went their different ways and … I would like to add, played by the great actor Delroy Lindo, he really makes you understand why he’s wearing that hat, and you have sympathy for him.”

The color of a person’s skin should have nothing to do with who they vote for. A person needs to vote based on their conscience and what they believe politically and ideologically. If that means a black person votes Republican, so be it. Why does it matter if some black folk have a totally different set of values they adhere to than those of other members of the same community?

The loyalty to the Democratic Party is astounding, given the racist history of the political body and how they have constantly failed to elevate black communities in urban centers out of massive decay and poverty.

Here’s to hoping people wake up to all of this sooner rather than later.