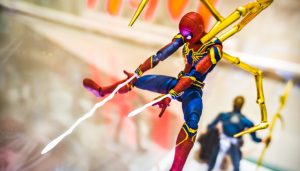 The late, great Andrew Breitbart once said that politics flows downstream from culture.

Time has only served to prove him right. Unfortunately, many conservatives have tended to focus strictly on politics to the neglect of pop culture.

Liberals and progressives have been hard at work for decades trying to take over every institution critical to our society, including education and the entertainment industry.

The ultimate goal being to take over and freeze out other messages from reaching the masses in order to normalize progressive thought and cast anyone who thinks for themselves as villains standing in the way of furthering society and transforming it into a utopia.

They understood what Breitbart was said and were willing to play the long game to take over entertainment and thus control the messaging spoon fed to the masses.

Thus, we have the tons of “woke’ messages pervading movies, television, and literature that we see today. And, of course, the censorship of conservative thought and the focus on cancelling anyone who dares to spout an opinion that does not line up with their groupthink.

However, if the results of  “Ghostbusters: Afterlife,” and “Spider-Man: No Way Home,” are any indication, it seems the masses have grown sick and tired of being preached to when they go to the movies.

Both of these films were “woke-free” for the most part, and due to that, folks came out in droves to visit theaters to watch them. Not even the coronavirus pandemic, which director Stephen Spielberg and other Hollywood studio ilk blamed for the poor performance of his “West Side Story” remake, could keep butts out of the seats.

Some critics are saying that the massive success of the new movie, “Spider-Man: No Way Home,” shows beyond a doubt that movie audiences are seeking films with substance and heart, not woke messaging that’s nothing more than thinly veiled propaganda for Leftist causes.

And some proof they’re citing is how “No Way Home” just smashed box office expectations, raking in $253 million domestically opening weekend, according to Variety. Before this, no post-COVID-19 film had managed to cross the $100 million mark in just one weekend.

Others have tried, however. “Spider-Man’s” monstrous success comes in the recent wake of Spielberg’s huge “West Side Story” flop that failed despite an aggressive marketing campaign in Hollywood. Critics blamed a surge in the virus with the Omicron variant going strong as a reason people just didn’t want to go to the movies. But “No Way Home” proves there’s something else going on.

Critics and fans both adore the latest “Spider-Man” movie, with the Observer calling it, “An overflowing, funnel-web cornucopia of treats for Spider-fans.” A ReelViews critic said, “As superhero movies go, this one offers its share of satisfying moments and is guaranteed to warm the heart of any Spider-Man movie fan, regardless of when their fandom started.”

According to the Daily Wire’s report, the consensus about the film is that it “was made with the fans in mind and differs from what Disney has done in the past. This is likely because, technically, Sony still owns the film rights and creative control despite being under the gigantic Disney umbrella.”

Conservative news outlet Breitbart took many moviegoers and critics to the woodshed for not coming right out and explicitly stating this was the reason behind the film’s success.

“Newsflash: If you make a decent movie that seeks to entertain and move — instead of lecture and shame — we will show up,” John Nolte wrote in his piece. “‘Spider-Man: No Way Home’ does precisely that. You will not only have a great time at the movies again, but there’s no gay, transsexual, or racial nonsense. This movie is about only one thing: Delivering the goods.”

“On the whole, action movies tend to out-perform more thoughtful films. But even these types of storylines have been suffering lately. “Black Widow” bombed because of overtly feminist themes that superseded the central narrative. “Eternals” had a similar issue because audiences saw the extraordinarily politically correct agenda and rebelled against it,” Daily Wire’s Amanda Harding wrote.

It seems that after decades of being forced to experience stories through the lens Hollywood wants us to view them through, we’ve reached a particular point where the message being sent out is singular with no room for divergent opinions. This does not sit well with fans.

“Spider-Man: No Way Home,” is in theaters now and currently has a 94 percent fresh rating from critics on Rotten Tomatoes with a fan score of 99 percent, as of this writing.