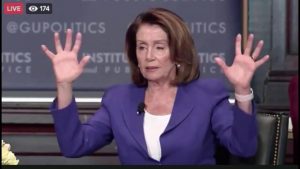 House Speaker Nancy Pelosi stated on Friday that she will be sending the article of impeachment against Donald Trump to the Senate on Monday, which will then kick off the start of the former president’s trial on a charge of incitement of insurrection.

This, as you probably already know, is in reference to the Capitol Hill riot back on January 6. A lot of folks are questioning whether this impeachment trial is even constitutional given Trump is no longer president. Guess we’ll find out soon enough.

Senate Democratic leader Chuck Schumer announced Pelosi’s intentions for a quick trial on the Senate floor Friday, rejecting Republicans’ proposal to push it to mid-February to give Trump more time to prepare his case. Schumer said there will be “a full trial, it will be a fair trial.”

Pelosi said her nine impeachment managers, or House prosecutors, are “ready to begin to make their case” against Trump. She said Trump’s team will have had the same amount of time.

Trump, who told his supporters to “fight like hell” just before they invaded the Capitol two weeks ago and stopped the electoral vote count, is the first president to be twice impeached and the first to face a trial after leaving office. He is still assembling his legal team.

While sending over the article starts trial proceedings, there still is no set schedule for when these events will take place. Right now the Senate, which is under Democratic Party control, is working hard to get all of President Biden’s nominee appointed to their Cabinet positions.

Biden has stated he thinks the Senate can actually do both.

The one question the radical left seems to be avoiding is whether or not this trial is even constitutional. They just keep right on trying to push it forward, hoping beyond hope they can get Trump convicted so that he cannot ever run for office again.