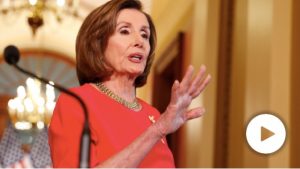 House Speaker Nancy Pelosi, who sabotaged all of the first efforts to get a stimulus package bill passed that would help provide Americans who have experienced economic hardship due to shutdowns from the coronavirus, has signaled she might be a bit more supportive of the new legislation making the rounds.

Isn’t it sick and kind of pathetic that Pelosi and her ilk in the House used the suffering of Americans to try and get all kinds of pet projects and pork spending attached to a bill that was meant to help ease hearts and minds during these troubled times?

In a written statement, Pelosi indicated, however, she is open to the latest Senate version.

“America is facing a grave health crisis with a serious impact on our economy. I salute the strong leadership of Chuck Schumer and Senate Democrats,” she said Wednesday. “I especially thank our House Democratic Committee Chairmen, who worked hard to move the Republican proposal from corporations-focused to workers-first and who will now review the legislative text of this agreement with our Caucus.”

Pelosi went on to say that the original Senate GOP legislation, which was blocked by Democrats twice in the Senate, “was a non-starter.”

“This bipartisan legislation takes us a long way down the road in meeting the needs of the American people,” Pelosi said.

As of now, it’s still unclear whether or not the rest of the House Democrats will be throwing their support behind the legislation, but if they truly care about Americans — who are potential voters by the way — then politics would be cast aside in favor of helping the “little people.”

Isn’t that what Democrats claim to be all about? Helping the average working person and protecting them from the evil, vile rich folk oppressing them?

Ironically, the vile rich people oppressing them are the Democrats, as this situation clearly illustrates.