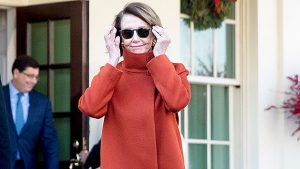 House Speaker Nancy Pelosi has come out and stated that she did not agree with former Secretary of State — and twice failed presidential candidate — Hillary Clinton about calling on Congress to put together a 9/11 Commission-style body to investigate Trump’s alleged ties to Russian President Vladimir Putin.

The problem here is there is a viral tweet going around that says otherwise.

Pelosi made an appearance on Clinton’s podcast, You and Me Both, released over the weekend, after which Clinton tweeted on Monday afternoon: “Speaker Pelosi and I agree: Congress needs to establish an investigative body like the 9/11 Commission to determine Trump’s ties to Putin so we can repair the damage to our national security and prevent a puppet from occupying the presidency ever again.”

The Washington Examiner reached out to Pelosi’s office seeking confirmation of whether Clinton’s claim was true, as it was unclear in the interview whether Pelosi was agreeing to such a bipartisan commission to look into the Russia issue or the Jan. 6 riot at the Capitol.

Drew Hammill, Pelosi’s spokesman, said it was the latter. “The commission the speaker is talking about relates to the attack on the Capitol. That is clear from her answers,” he said. He also directed the Washington Examiner to the podcast transcript. He did not respond to a follow-up question on whether Pelosi believed Clinton mischaracterized her.

The whole idea of a 9/11 Commission panel was brought up when Pelosi and Clinton were talking about the Capitol building siege, which the former secretary of state then swung into talks about Russia.

It seems Hillary is really, really obsessed with Russia, doesn’t it?

“We learned a lot about our system of government over the last four years with a president who disdains democracy and, as you have said numerous times, has other agendas. What they all are, I don’t think we yet know. I hope, historically, we will find out who he’s beholden to, who pulls his strings. I would love to see his phone records to see whether he was talking to Putin the day that the insurgents invaded our Capitol,” Clinton stated. “But we now know that not just him but his enablers, his accomplices, his cult members have the same disregard for democracy. Do you think we need a 9/11-type commission to investigate and report everything that they can pull together and explain what happened?”

“I do. Let me again, to your point of who is he beholden to, as I have said over and over, as I said to him in that picture with my blue suit as I was leaving, what I was saying to him as I was pointing rudely at him, ‘With you, Mr. President, all roads lead to Putin.’ I don’t know what Putin has on him politically, financially, or personally, but what happened last night was a gift to Putin because Putin wants to undermine democracy in our country and throughout the world,” the House Speaker responded.

“And these people, unbeknownst to them, maybe, are Putin puppets,” Pelosi said.

“They were doing Putin’s business when they did that at the incitement of an insurrection by the president of the United States,” she went on to say. “So, yes, we should have a 9/11 commission, and there is strong support in the Congress to do that.”

Well, it certainly seems like she did indeed agree with the idea of this kind of commission, doesn’t it?

Someone needs to give Hillary a mental evaluation. She’s starting to go loco. At the very least, someone get her fitted for a tinfoil hat.