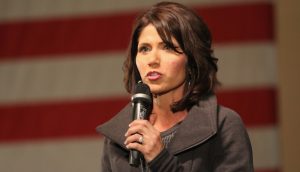 The South Dakota House has voted once again to pass a bill that bans biological males from women’s sports, rejecting Gov. Kristi Noem’s “style and form” veto, which sends the legislation right back to her desk.

The House voted 67-2 in favor of sending the bill back to Noem’s desk for her signature while rejecting changes she proposed that critics said would gut the bill. The bill, H.B. 1217, dubbed the Fairness in Women’s Sports act, was meant to protect the integrity of women’s sports by effectively banning transgender females from competing on women’s teams from the collegiate level down.

Noem blocked the bill on March 19 by a “style and form” veto in which she sent the bill back to the legislature with suggested changes. Critics alleged that her changes gutted the bill by removing protections from the collegiate level.

“Vote to pass the governor’s style and form veto on the Fairness for [Women’s] Sports bill fails 2-67. The bill now goes back to the governor for her to either sign or veto. House believes her style-and-form is unconstitutional,” GOP state Rep. Fred Deutsch tweeted on Friday.

Vote to pass the governor's style and form veto on the Fairness for Woemn's Sports bill fails 2-67. The bill now goes back to the governor for her to either sign or veto. House believes her style-and-form is unconstitutional.

Noem originally said she would sign the bill just a few weeks before it actually reached her desk in March. However, she soon backed off the pledge and stated that if the bill became law, it would end up getting struck down in court if it remains as it is currently written.

She then went on to add that the NCAA had already threatened to pull collegiate tournaments from the state.

“Unfortunately, as I have studied this legislation and conferred with legal experts over the past several days, I have become concerned that this bill’s vague and overly broad language could have significant unintended consequences,” Noem stated in a letter addressed to state lawmakers after she vetoed the bill. “I am also concerned that the approach House Bill 1217 takes is unrealistic in the context of collegiate athletics.”

Noem had a strong reputation for being a rock solid conservative during the coronavirus pandemic lockdowns, refusing to shut things down in her state and encouraging residents to make their own decisions about the virus and how to handle it.

But after this action with the sports bill, many are beginning to question her authenticity.