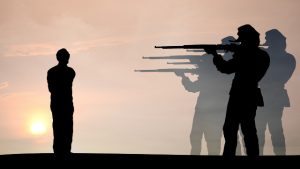 Silhouette of a detachment of military soldiers executing a criminal for the concept death by firing squad.

The South Carolina State House voted Wednesday to add the firing squad to the list of the state’s approved execution methods.

The bill, which passed by a 66-43 vote, mandates that inmates on death-row can select between firing squad or electrocution should the state not be able to procure the drugs used for a lethal injection at the time of the scheduled execution.

The Senate actually approved what is very much the same piece of legislation in March by a vote count of 32-11, which means the bill will now cross the desk of GOP Gov. Henry McMaster, who made it clear he already plans to sign it into law.

“We are one step closer to providing victims’ families and loved ones with the justice and closure they are owed by law,” McMaster posted in a tweet Wednesday following the vote. “I will sign this legislation as soon as it gets to my desk.”

The S.C House has given second reading to a bill that will restore the state’s ability to carry out the death penalty.https://t.co/UXdMWpCu4D

This makes South Carolina the fourth state to approve the firing squad.

Like other states with capital punishment, South Carolina has struggled to secure lethal injection drugs. One Republican said that’s not fair.

“Those families of victims to these capital crimes are unable to get any closure because we are caught in this limbo stage where every potential appeal has been exhausted and the legally imposed sentences cannot be carried out,” said state Rep. Weston Newton.

In lieu of executions, prosecutors have sought guilty pleas “with guaranteed life sentences over death penalty trials, have cut the state’s death row population nearly in half — from 60 to 37 inmates — since the last execution was carried out in 2011,” The Associated Press reported. “From 2000 to 2010, the state averaged just under two executions a year.”

Before the vote, one state Democrat said lawmakers will have blood on their hands if they support the bill.

“Three living, breathing human beings with a heartbeat that this bill is aimed at killing,” state Rep. Justin Bamberg went on to say. “If you push the green button at the end of the day and vote to pass this bill out of this body, you may as well be throwing the switch yourself.”

“Somehow, here today we find ourselves in the position in this body to once again give a voice to that belief system that in this state, we’re a state about life, while simultaneously taking up a bill that’s not about life, that doesn’t cater to the ‘belief system’ in our state that its a state of life,” Bamberg continued. “This is about death.”

At the end of the day, if these criminals on death row are guilty of taking the life of innocent people, then they deserve the death penalty. Our system of justice is not based on punishment, but on restitution. However, when someone takes a human life, there’s nothing of equal value that can restore that person’s life.

Therefore, when someone kills another human being on purpose, what we call murder, then they forfeit their right to life. Period.