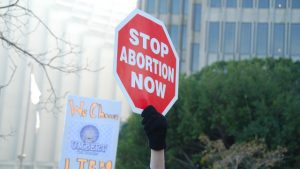 Could it be that the tides are changing?

The South Carolina Senate has taken a huge step toward affirming the sanctity of life by approving a new piece of legislation that bans all abortions except in cases of rape, incest, or threats to the mother’s life.

While it would be a whole lot better if every single abortion was banned and was properly labeled murder, this is still a great step in the right direction and will save countless lives.

The bill effectively bans almost 97% of the 5,700 abortions that are performed in the state annually. The legislation passed the Senate with a vote of 28-10.

However, the bill requires a second vote of approval before it will be kicked over to the House.

Now we all know that even if this law passes, it will no doubt be dragged before the Supreme Court due to the ruling of Roe v. Wade, but that seems to be the one of the bill’s major designs.

LIKELY AT LEAST ONE SCOTUS JUSTICE, WOULD HAVE TO LEAVE BEFORE PRO-LIFERS COULD EVER HOPE FOR AN OVERTURNING OF ROE V. WADE. EVEN IF THEY WERE TO DO SO, PRESIDENT TRUMP WOULD STILL HAVE TO APPOINT A JUDGE WITH THE FORTITUDE TO PASS THE GAUNTLET OF SENATE HEARINGS.

While it might be true that this bill will get overturned by Roe v. Wade, it’s critical to keep the conversation going in front of SCOTUS because our ultimate goal is the protection of our most basic, fundamental right: the right to life.

If we cannot provide protection for the lives of the unborn, our most vulnerable citizens, how are we ever going to protect our other rights?

If the government has the power to decide who lives and who dies, how can we keep them from silencing our free speech or taking away our right to a fair trial?

The simple answer is you can’t. They already possess ultimate power at that point.

This is one reason — among many — that the fight against abortion is so critically important and why we must continue to push for what we know is right.