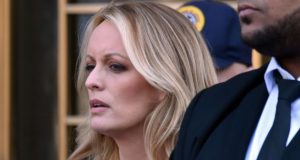 Since we first heard Stormy’s name (…at least, since we first heard her name in the context of politics, some of y’all might have already known her), it’s been one wild ride from 24/7 news coverage, zany press conferences, TMI descriptions of her encounter with Trump, and who can forget that time she was arrested for groping police officers at a strip club?

She and Avenatti have managed to milk her claims that Trump and co. threatened her and offered her money illegally to keep her quiet about an affair they had over a decade ago for all their worth, and much of the American public was convinced.

Of course, much of the American public would believe Trump was a reptilian who kicked puppies for fun if the media hinted at it.

But when it comes to the actual judicial system, her claims were apparently not even worth the court case she was vying for, which suggested that Trump had defamed her when he said she lied about him paying to keep her quiet.

A federal judge on Monday dismissed a lawsuit from adult film actress Stormy Daniels that claimed President Trump defamed her when he suggested she had lied about being threatened to keep quiet about their alleged relationship.

U.S. District Judge S. James Otero in Los Angeles ruled that Trump’s speech was protected by the First Amendment as the kind of “‘rhetorical hyperbole’ normally associated with politics and public discourse in the United States.” He ordered Daniels, whose given name is Stephanie Clifford, to pay Trump’s legal fees.

“No amount of spin or commentary by Stormy Daniels or her lawyer, Mr. Avenatti, can truthfully characterize today’s ruling in any way other than total victory for President Trump and total defeat for Stormy Daniels,” Harder said in an emailed statement.

Apparently, liberal hysteria is not admissible as evidence in a court of law.