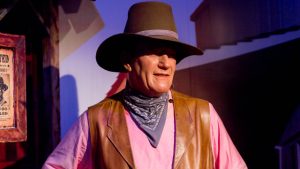 Ethan Wayne, the son of legendary actor John Wayne, has come out and slammed efforts by radical left-wingers to rename the Orange County’s John Wayne airport because they believe his father was guilty of uttering “racist and bigoted statements” fifty years ago.

I think anyone who has a dad understands why this would upset Ethan so much. He’s totally justified in standing up for the legacy of his father, especially during a time when the left is hungry to cause trouble and stir controversy wherever they can, including the erasure of our history and culture.

Check out more from Daily Wire:

“Let me make one thing clear — John Wayne was not a racist. I know that term is casually tossed around these days, but I take it very seriously. I also understand how we got to this point,” Ethan Wayne said in a statement to Fox News on Monday.

“There is no question that the words spoken by John Wayne in an interview 50 years ago have caused pain and anger,” Ethan said, referring to the late actor’s 1971 interview with Playboy. “They pained him as well, as he realized his true feelings were wrongly conveyed. The truth is, as we have seen in papers from his archives, he did not support ‘white supremacy’ in any way and believed that responsible people should gain power without the use of violence,” Wayne said.

“Those who knew him, knew he judged everyone as an individual and believed everyone deserved an equal opportunity,” Ethan added. “He called out bigotry when he saw it. He hired and worked with people of all races, creeds, and sexual orientations. John Wayne stood for the very best for all of us — a society that doesn’t discriminate against anyone seeking the American dream.”

Ethan Wayne went on to say that it “would be an injustice to judge him based on a single interview, as opposed to the full picture of who he was.”

This is a very true statement. What the left refuses to acknowledge is that people are complex beings. We’re not all good and all bad. We are a mix of the two. We are capable of great evil, just as we are capable of doing acts of great good. Why judge the worth of a person just because of one area where they were weak? That doesn’t seem fair at all. We wouldn’t want that done to us as individuals.

County Democrats passed a resolution on Friday to demand the airport be renamed, also demanding that all photographs and likenesses of Wayne be removed as well. The airport was named after Wayne in 1979, not long after he passed away.