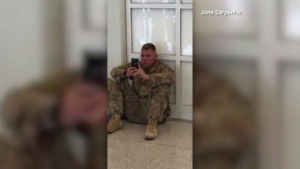 Technology can often seem like a big drag. Everyone is buried in their phones, losing friends and family members over political disagreements on social media, and younger generations seem to be growing up more disconnected from society than ever before.

But there are times when we are reminded just what a huge benefit technology can also be, from things as complex as sending a rover to Mars or discovering a miraculous medical breakthrough, to something as small as a soldier witnessing the birth of his first child from hundreds of miles away.

If there’s anyone that appreciates the high-tech communications breakthroughs of the last few decades, it’s got to be our men and women in uniform, who spend days, weeks, months, and sometimes even years far away from loved ones as they honorably serve their country and protect the homeland.

Army National Guard Specialist Brooks Lindsey recently found himself stuck at Dallas-Fort Worth as the flight meant to take him back home to Mississippi to be there for his wife’s emergency induction was delayed.

He had been in the middle of training prior to his deployment in Kuwait when he received the news that his little girl, Millie, was on the way, but was distraught to find he’d have to wait to get back home.

His mother, who was at the hospital with his wife, Haley, saved the day when she FaceTimed the delayed soldier from the delivery room.

“My mom called me and said Haley was starting to push,” he said. “At first they said no videos, but then when they found out what was going on and she was FaceTiming me, they let me watch the whole thing.”

Lindsey’s fellow passengers were incredibly moved to see the solider sitting on the floor of the airport, witnessing the birth of his daughter on his iPhone.

“I’m thinking, Oh my gosh,” Tracy Dover, a witness, told CBS News. “He’s watching his baby be born on the phone and it was the most gut-wrenching, heartbreaking thing I’d ever seen.”

Lindsey’s wife, however, says the delay turned out to be a blessing, as if he’d been in the air at the time of their daughter’s birth, he wouldn’t have seen anything.

“When we heard the baby cry, then just that whole section that was heading to Mississippi just started cheering,” Dover said.

Militarykind on Facebook, which regularly shares tear-jerking videos of the daily reality of the sacrifices our troops and their families make, shared the video:

Technology might help to ease the burden these families face every day as they choose to serve their country, so let’s never forget to honor and thank them for their bravery and sacrifice!