Softball Announcer Says No National Anthem Before the Game, The Crowd Had Different Plans 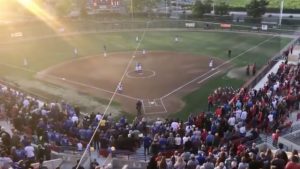 In Fresno, California, a crowd of patriotic Americans decided to take matters into their own hands when an announcer stated that there would be no playing of the National Anthem before the start of a high school softball championship, a move that will absolutely bring tears to your eyes, especially since this happened on Memorial Day weekend.

There’s little doubt this has some sort of connection to the whole controversy over the anthem that was started by NFL players taking a knee before games, disrespecting the many soldiers who bled and died to preserve our freedom.

At the Friday game in Fresno between Clovis High and Buchanan High for the Central Section championship, an announcer said there would be no playing of the Star-Spangled Banner before the game. “There will be no anthem, let’s just play softball,” said the announcer, according to the Fresno Bee.

Well, that didn’t go over so well in the crowd, especially on the Memorial Day holiday weekend, when Americans pay homage to all the soldiers who have fought and died to keep the United States free.

So the crowd stood up and sang the national anthem anyway, a cappella.

Folks started removing their hats, put their hands over their hearts, and others just beamed with pride and love for their country.

Many of the players on the field turned toward the flag and when the song was through, the crowd burst into applause.

Bob Kayajanian, the event coordinator of the Central Section said the whole situation was his fault.

Here’s a video of the incident. Seriously, if you don’t cry at this you have no soul:

Clovis and Buchanan softball about to play for D-I title, but before that, it was announced there will be no national anthem. There were boos and the crowd did this … pic.twitter.com/M1w6yDzuTN