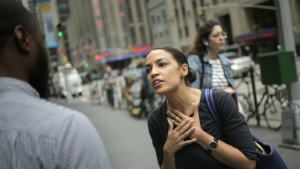 28-year-old Alexandria Ocasio-Cortez has been the talk of the town since she upset Democrat fixture Rep. Joseph Crowley (D-NY) in the New York race for Congress last month.

She’s being called the new face of the Democratic party and, considering she seems to actually be causing more division and in-fighting than any kind of unity, this may very well be true.

Either way, they’re likely to lose the next Presidential election unless they come up with someone spectacular.

While it seems they may have found a future star in Ocasio-Cortez, it seems she’s already hitting Democrats right where it hurts and has, before even being elected, already made some enemies in the Party.

The Hill reports that some legislators have criticized her for attacking Crowley, after he endorsed her following her upset of his seat.

“She’s carrying on and she ain’t gonna make friends that way,” said Rep. Bill Pascrell (D-N.J.). “Joe conceded, wished her well, said he would support her … so she doesn’t know what the hell she’s talking about.”

“She’s not asking my advice,” he added, “[but] I would do it differently, rather than make enemies of people.”

“Meteors fizz out,” he said. “What she will learn in this institution is that it’s glacial to begin with, and therefore no matter how far you rise, that’s just how far you will ultimately get your comeuppance.”

It’s not surprising that her newfound admiration from a very favorable media would be going to her head!