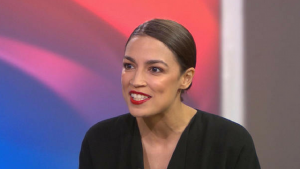 Alexandria Ocasio-Cortez is the gift to conservatives that just keeps on giving. She first caught our attention when she upset a stalwart Democrat who was the third highest member of the party in House leadership.

Then, she proceeded to…talk.

And talk. And talk.

Each absolutely ignorant and laughable comment more hilarious than the last.

A quick recap on her greatest hits:

Now, as someone who covers the news, I do try not to report on literally every silly thing this woman says, but she’s making it really hard not to keep coming back to her, particularly with this latest disastrous tweet:

So yeah, I’d say this a representative choice of their values. https://t.co/7Lc9QJGv0M

You walked right into this one.

The Daily Wire’s Ryan Saavedra wrote a lengthy refute of just how very wrong Ocasio-Cortez’s statement is, which I’ll summarize:

For the claim that the GOP is “weak on fighting for working-class Americans”, Saavedra references the positive effects of Trump’s tariffs on the American economy, the dramatic tax cuts that have benefitted 80% of Americans, and the booming manufacturing industry under Trump’s policies. I will also add that these are the things Trump one on precisely to help the American working class.

“Keep in mind that this statement is coming from an admitted socialist who believes in taxing citizens to pay for costly government programs that end up harming the economy,” Saavedra says.

Next, the claim that the GOP is “weak on crime”, to which I say….is she high?

The GOP has repeatedly been bashed for being too tough on crime, and Ocasio-Cortez herself has called for open borders and the abolishment of ICE.

This is perhaps the most absurd claim the Democratic candidate made in the tweet.

The Trump administration threw out the Iran deal because it was not tough enough, has worked to denuclearize North Korea, has implemented a travel ban on nations that are breeding grounds for terrorism, wants to build a wall on the Southern Border to stop illegal entry into the U.S., and has largely defeated ISIS.

As for “the GOP is weak on moral courage” and “weak on family values”? Do I even need to refute these absurd claims?

It’s terribly unoriginal to say that the GOP is “weak on rejecting racism” not to mention absolutely ridiculous considering they were the party of abolition and Civil Rights. Saavedra also points to Ted Cruz’s recent disgust at an open Nazi who won a GOP nomination in a Congressional race:

This is horrific. An avowed Nazi running for Congress. To the good people of Illinois, you have two reasonable choices: write in another candidate, or vote for the Democrat. This bigoted fool should receive ZERO votes. https://t.co/9WYlvCMKaF

“As for Ocasio-Cortez, the best thing for the electoral chances of the GOP is for her to keep talking and tweeting,” he concludes.