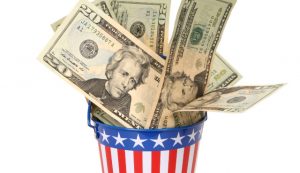 It seems that a “social justice” consulting firm that makes its bread and butter by putting together “anti-racist” training materials for corporations, along with educational facilities, is actually funded by the tax dollars of hard working American citizens.

A new report that came out recently from The Washington Free Beacon has stated that the Mid-Atlantic Equity Consortium’s tax filings have revealed that the firm managed to haul in a whopping $2 million between mid-2018 and mid-2019, all of which came from government grants.

Apparently, the firm has not reported any private donations to the organization in the last four years. That means our hard earned money that Uncle Sam zaps from our paychecks has been keeping this organization going during that entire time.

As the Free Beacon reported, MAEC “a self-proclaimed ‘social justice’ nonprofit that conducts ‘anti-racist audits’ for corporations and schools, often in partnership with far-left groups such as the Southern Poverty Law Center.” The SPLC routinely labels right-leaning organizations as “hate groups” for ideological differences, and has been sued successfully by many people and groups put on their hate lists.

MAEC recently received a $454,680 contract to work with Maryland’s largest school district by conducting one of its “anti-racist audits” of school policies. The firm has similar contracts with educational institutions in 15 states and U.S. territories.

“The MAEC also touts a handful of left-leaning education partners, including the Southern Poverty Law Center’s ‘Teaching Tolerance’ arm, which pushes for students to learn about slavery beginning in kindergarten. The consortium is considered the main equity firm in the Mid-Atlantic region,” the outlet reported.

You know, if there’s one thing the government excels at, it’s taking money that doesn’t belong to them and finding creative ways to waste it.

If a conservative organization was being funded with tax payer dollars, how loud would the shouting be from the radical left? It’s all you’d hear on the news for weeks on end.

And somehow, they’d find a way to blame President Trump for it. Because, really, that’s all the media manages to do. If Trump doesn’t get a second term, how are they going to boost ratings?