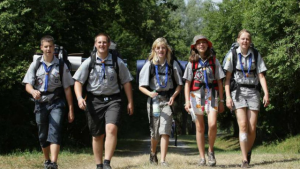 In a few short years, political correctness has gone from making sure you use the right word for a certain ethnic group to pretending there is no such thing as biologically determined gender.

How did it all happen so quickly?

One of the many babies that has gotten thrown out with this bathwater of crazy is the time-honored institution of the Boy Scouts of America, which, as it celebrates its 108th birthday this month, will cease to be the Boy Scouts altogether.

There was a time when we would have called that “sexist”. Apparently, the golden age of logical political correctness and gender-specific scouting groups has passed.

And now, the ever-compliant Boy Scouts have played along every step of the way, to the point of eliminating “Boy” from their name altogether, which they announced on Wednesday, USA Today reports.

“The umbrella organization will retain its name, Boy Scouts of America or BSA. The term Cub Scouts, for kids 7-10 years old, is gender neutral and also will go unchanged” (phew). “Boy Scouts, which includes kids from 10 to 17, will become Scouts BSA in February.”

This is pretty much everything wrong with feminism. Since the Second Wave of feminism began raging against traditional gender roles and demand women be viewed as equal to men in every possible way despite the irreconcilable biological differences between the genders (not that they haven’t been desperately trying to change that too, now more than ever), feminists have actually succeeded in undermining everything unique and powerful about women.

If being part of an organization for girls isn’t good enough, isn’t that kind of like saying that girls themselves aren’t good enough, and should instead strive to be boys? That doesn’t seem fair to girls or boys, and it sure as heck doesn’t make any sense.

Feminists will never be happy as long as God keeps making people male and female, so maybe we should stop kowtowing to their complaints and just let boys be Boy Scouts and girls be Girl Scouts. How hard is that?