So, Bernie’s A Socialist Millionaire, And Nobody Can Decide If That’s Good Or Bad 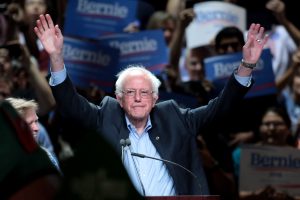 There’s been quite a bit of noise about Sen. Bernie Sanders’ financial prosperity for some time now, and rightly so.

Given that the self-described democratic socialist has made the wickedness of millionaire and billionaire fascist oligarchs a fixture in his presidential campaigns, it has left many folks confused and speechless to find that the guy’s actually closer to the 1% he’s inspired an entire generation to despise.

Cornered by his vague wording into an April 15th deadline to join the cool kids at the “I Published My Tax Returns, I’m So Noble” table, Sanders published a ten-year stack of tax returns filed by himself and his wife.  Upon the realization that Sanders is among the 5% of America’s wealthiest citizens, the establishment Democrat mainstream media is, naturally, eating him for breakfast.

Already, the New York Times is declaring him part of the 1% (well, the wealthiest percentage of taxpayers according to the IRS, anyway), the Washington Post is questioning his ability to faithfully represent all those downtrodden and poor fast food workers and neo-socialist college kids crushed under the weight of their college debt after pursuing a degree in underwater basket weaving, and, as evidenced by Reddit, assorted little fish liberal news sites and blogs are just going plain bonkers.

Not to mention ThinkProgress, a “think tank” founded by John Podesta, a close friend and campaign chairman of She Who Must Not Be Named, who is unabashedly smearing Sanders’ wealth as “embarassing”—as if She isn’t a kajillionaire herself.

So, now that The Bern has finally come out of his million-dollar closet, is it a good or a bad thing that the guy’s wealthy?

A little of both, if you ask me.

Wealth is a very, very relative thing, especially here in America where the majority of folks reading this who have access to the internet and a glowing screen to stare at will never understand the depths of poverty outside the prosperous bubble of Western Civilization (which, side note, is why missionaries are such a rare breed today).

With that said, this is America, people. Was McCarthy right? Have we been hijacked by socialists? Yes and heck yes, but our economy is still built around a “free enough” market in which anyone, even a raging socialist, can write a bunch of books for pseudointellectual hipsters to pad their shelves with and earn hundreds of thousands in royalties.

Writing a book ain’t easy, y’all, believe me. So, when someone puts that hard work into writing one and it pays off big, that’s a good thing, and we should applaud it.

But, then, there’s Bernie. There’s Bernie who, if he can overcome the cascade of hit pieces the shameless liberal media is trying to lure away voters with, now gets to claim the ultimate white knight status. Already he’s talking about increasing his own tax contributions and, if he gets to the Oval Office, increasing those of the rest of his fellow American millionaires, billionaires, and kajillionaires.

If anything, this whole millionaire debacle is a testament to Sanders’ stunning ignorance of what a beautiful, precious thing a truly free market is—something we sure don’t have today and can shelve along with our dreams of learning to play the bagpipes (is it just me?) if a socialist takes the White House.

If fortune hadn’t smiled on The Bern and he was born, say, a Venezuelan citizen instead, I can guarantee you he’d have had to come to mean old capitalist America to write those best-selling books. There is simply no room for wealth in a society that has given itself over to total socialism—unless, of course, you’re a government official.

More than likely, Sanders and his die-hard Bernfeelers will never realize just how much of their prosperity—and, looking at much of the world, even the poorest among them is definitely prosperous—is owed to capitalism. And, having earned the moral high ground by forking over all that spare cash in taxes, this might not be a major setback on his way to the primaries.

That’s the real problem with Bernie being a millionaire.