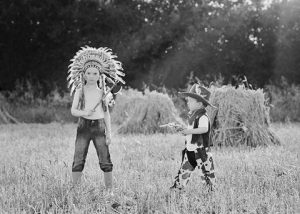 Another day, another case of people in the most wealthy and comfortable nation on earth b*tching about absolutely nothing.

Comedian Kevin Hart, who had the audacity to throw a birthday party for his son, is feeling the searing burn of SJW judgment after his wife posted a picture thanking friends and family for coming out to the boy’s “cowboys and Indians” themed party.

Really? Are we really going to do this?

“As fellow aboriginal people, y’all should know why this ‘theme’ is wrong on so many levels. Sickening,” one person wrote in a comment, while another person told the couple to “learn history.”

“As a person of color you SHOULD know better, than again, I dont see you standing up for nothing but laughs,” a follower commented.

One person said, “Cowboys and Indians? Can you not afford a publicist who would explain the reality [of] such a terrible idea?”

This is the problem with worshipping celebrity.

Why do we just assume that because a person is famous they have to adhere to some prescribed idea of what it means to be politically correct?

Can they not simply be human, and do things that other people might find offensive?

To his credit, Hart hit back, and hard on his Sirius FM show this week.

“The reason why I’m even bringing this dumb s—t up is because it shows just how stupid our world is becoming with our opinions,” the comedian said. “People are at a point of an all-time high. To throw racial judgement into the development of a 1-year-old’s birthday party where the theme is ‘Cowboys and Indians’? It’s based around the outfits that are given to the young kids!”

Hart also addressed a commenter who criticized the celebration by comparing it to “a slave owner and a slave party.”

“If you don’t think there’s neighborhoods where they play that game in certain white neighborhoods, then you’re a f—king idiot. You don’t think they had dumbass games like that? As a kid, do we play cops and robbers? As a kid, did you play cowboys and Indians? When you were a child, if you go to stores, you go to look at paraphernalia,” the Jumanji actor explained. “To be a cowboy, you’re buying boots, you’re buying a gun, you’re buying a hat. Some even had a lasso … As a kid, when you played these games, it was based off of the premise from a hypothetical place that was put into our perception for movies.”

He added: “What I’m saying is this isn’t something that just started. This isn’t a racial slur that people are doing or being malicious with. This is a game that’s been played for years.”

These people are always going to be upset if a celebrity doesn’t fall in lockstep with their miserable game of identity politics.

It’s time we stop going along with the notion that literally everything is offensive and start just enjoying American culture again.