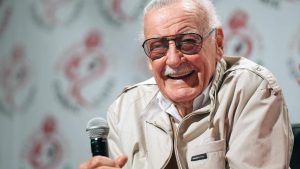 It wouldn’t be 2018 if the passing of a great cultural icon like Stan Lee wasn’t honored with lots of whiny SJW rants on Twitter.

On Monday, at the age of 95, after a truly remarkable career that left us with countless characters and stories that will no doubt be canonized in our culture for generations to come, Stan Lee passed.

Many mourned his passing and paid homage to his life, but a few select SJWs complained about him instead on Twitter, because they apparently couldn’t get him to be a groveling leftist hack enough during his lifetime, or something.

That’s right–he was apparently, along with being an incredible creative mind, a, say it with me now, sexist, racist, homophobic bigot.

Journalist Ian Miles Jong documented the whines of “woke Twitter” at the news of Lee’s passing:

As to the charge that he, like every other male ever in the entertainment industry, assaulted a woman, the claims never amounted to much (yes, I know plenty of men in the industry actually assaulted women, to be fair.)

But you know, believe all women, so it must be true, right?

“[E]verybody is quoting this saying “y’all always tweet this sh*t after somebody dies” we were tweeting it when he was alive too b*tch! y’all just didn’t listen or care. but now that he’s dead suddenly y’all wanna stuck up for him? okay. you’re transparent,” one Twitter user complained before later deleting his post.

“Look I don’t have time for this sh*t. White people, in the big ass majority are racist. Most white famous people are disgusting. White people literally invented racism. Go suck Stan Lee’s d*ck if you support him so much, ok? I have better things to do like celebrate his death” another user charmingly wrote.

While many of the “brave” keyboard warriors slamming Lee postmortem later deleted their posts, those who hit back at critics kept theirs up, pointing out that Lee was quite open about how often Lee railed against bigotry and intolerance.

for anyone that's saying #StanLee was racist or anti-LGBT or anything like that, may i suggest you do some quick research? here, i'll even give you all this, just to help you get started: pic.twitter.com/GrIZcJBhu9

He was, after all, a passionate opponent of antisemitism and an avid supporter of the Civil Rights movement:

Stan Lee in 1968: "Racism and bigotry are among the deadliest social ills plaguing the world today … The only way to destroy them, is to expose them — to reveal from the insidious evil they really are." pic.twitter.com/oJnAFpe1ET

But because he didn’t want to change his time-honored characters to suit the desires of the radical-left cultural Nazis, he will forever be remembered as a bigot, apparently.