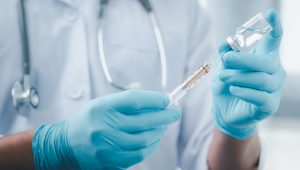 Six nurses have banded together to sue Illinois’s Riverside Healthcare after they denied their conscientious objections to taking the COVID-19 vaccines, despite state protections.

The Liberty Justice Center filed the lawsuit on Wednesday with the 21st Circuit Court in Kankakee, Illinois, on behalf of the six nurses. The organization argues that the Riverside blanket denial of all vaccine exemptions is in violation of the Illinois Health Care Right of Conscience Act, not to mention Gov. J.B. Pritzker’s executive order which allows for some exemptions to the mandate.

Five of the six nurses have until the end of October to get fully vaccinated. The other nurse was fired back in June.

“This is a ruthless overreach aimed at coercing front line workers to do something they sincerely believe is wrong,” Daniel Suhr, who currently serves as the managing attorney at LJC, went on to say in his statement. “These nurses know the virus better than anyone and are making a deeply personal, individual choice that should be respected. Not only is that the right thing to do, but it’s Illinois law.”

Neelie Panozzo, one of the plaintiffs, is a nurse practitioner who has been with Riverside for 24 years.

“I believe I am called to love and serve my patients, especially those who are frail and vulnerable,” Panozzo then said in the statement. “I am also following my faith’s teachings when I say I cannot accept this vaccine. I am ashamed that Riverside will not respect my sincere beliefs and instead insists on firing all of its employees who sought conscience protections.”

In a Sept. 30 interview , Riverside President and CEO Phil Kambic said the opposition to the vaccine had “taken [him] a bit by surprise.”

“I believe our community expects that when their loved ones are in our care, that the caregiver is fully vaccinated as one step of many to provide that safe environment,” Kambic commented.

The Illinois Right of Conscience Healthcare Act protects people and institutions who have “conscientious refusal to receive … or participate in any way in any particular form of healthcare services contrary to his or her conscience.”

“The Health Care Right of Conscience Act was never intended to allow people to avoid public health guidance during a global pandemic. The administration supports efforts to clarify the law, so it cannot be misinterpreted by fringe elements,” said Pritzker’s Deputy Chief of Staff Emily Bittner stated.

“In New York, a judge upheld religious exemptions for healthcare workers on Tuesday, though Gov. Kathy Hochul plans to appeal the ruling,” the report said.