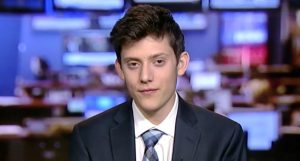 In the months following the Parkland massacre, the media fawned over David Hogg and his motley crew of anti-gun activist buddies who had survived the Parkland shooting.

Meanwhile, in the background, 16-year-old Kyle Kashuv, one of the few pro-Second Amendment students at Parkland who was willing to make his feelings known, has quietly built himself a formidable political presence, rubbing elbows with the likes of Ben Shapiro, Charlie Kirk, and Nikki Haley’s son, Nalin.

Now that Marjorie Stoneman Douglas High School will once again open its doors for a new school year, Kashuv is here to tell us that the school board has yet to make the security changes they promised following the shooting, and is taking matters into his own hands.

the Parkland, Florida teen is raising awareness about the problems his school district faces with incumbent Donna Korn on the school board.

In her opening convocation at the start of the school year, Korn said, “We’re coming off of an amazing year last year,” failing to mention the 17 lives lost in the shooting on Valentine’s Day.

“Donna Korn saying this was ‘an amazing school year’ is something that we should all take serious note to,” Kashuv told The Western Journal. “She’s currently part of the school board that was complicit in what happened to my school, had shielded corrupt Runcie, and has been involved in a massive cover up.”

“Incompetent Korn needs to go. She’s already shown she will go to any length to save her reputation and puts herself before the students.”

Kashuv is so passionate about creating real change in his community that he even made his own ad in support of school board candidate Ryan Petty, boosting it on his Twitter.

“I made this video so people can see the two candidates side by side. After watching this, to me, it is very clear that we need Petty elected,” the teen said.

On August 28th, we must unseat Incompetent Donna by electing @rpetty to @browardschools School Board.

Mr Petty is someone who every student at Douglas respects. A man who, with @AndrewPollackFL, has united Broward beyond political party. @rpetty will #FixIt! pic.twitter.com/Myyqpzsews

This is what true, grass-roots political action looks like. While the Soros money for David Hogg and his fellow media props seems to have dried up, Kashuv is going strong fighting for the issues that matter most to his community.

Keep it up, Kyle! You’re clearly going places–and fighting for the changes that will truly keep children safe in Parkland, and across the nation.