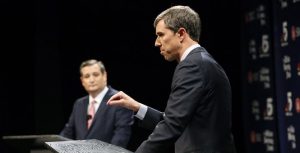 In the last two years, you’ve heard about everything Trump has done.

I’m sorry, you’ve heard about everything negative Trump has done. You’ve heard about the inarticulate tweets, the off-color jokes, the friendly presser with Putin, the praise for Kim Jong Un.

You heard about Roseanne’s controversial tweet for a week straight, and for two weeks no one in the nation seemed to talk of anything but Judge Brett Kavanaugh and the women who came out of the woodwork at the eleventh hour to accuse him of things they could barely remember, let alone prove.

You also may have heard about Russia.

What you haven’t heard about are controversies of equal, if not greater, proportion, involving Democratic candidates that the major news networks, CNN, MSNBC, and the “Big Three”, ABC, CBS, and NBC just didn’t have time to cover with all the Russia and Trump tweet meltdown coverage.

Newsbusters, staying true to their name, has taken account of just how much coverage these six controversies got from the major networks:

When Texas Senate Democratic challenger Beto O’Rourke lied about a past DUI arrest, it was so blatant even the liberal Washington Post’s fact checkers couldn’t let it pass.

On September 25 The Washington Post’s Glenn Kessler reported the following:

During a debate with his rival, Sen. Ted Cruz (R-Texas), Rep. Beto O’Rourke (D-Tex.) was asked point-blank about a drunken-driving incident when he was 26: Did he try to leave the scene of the crash? The Houston Chronicle and San Antonio Express-News had recently obtained police reports of the collision and reported that O’Rourke had done so. O’Rourke responded with what appeared to be a well-practiced answer. He flatly denied trying to leave the scene of the crash but added that driving drunk was a “terrible mistake” and that he would not provide an excuse….The police reports show not only that O’Rourke was highly intoxicated but that a witness to the crash said he tried to leave the scene.

Back in April, Democratic incumbent Senator Robert Menendez was officially admonished by the Senate for accepting gifts from a donor in exchange for promoting his interests.

The Senate Ethics Committee “severely admonished” Senator Robert Menendez on Thursday for accepting gifts from a wealthy doctor while using his position as a senator to promote the doctor’s personal and financial interests. It also ordered Mr. Menendez, a New Jersey Democrat, to repay the market value of all improper gifts he has not already repaid.

Earlier this month, the husband of Missouri Democratic Senator Claire McCaskill was accused of using a government program intended to help the poor, to personally enrich himself.

Since Claire McCaskill joined the Senate, her husband Joseph Shepard has made at least $11 million through a business that buys up tax credits awarded to Missouri affordable housing developers and sells them to high-income entities seeking tax relief.

At the height of the Brett Kavanaugh hearings, private information about Republican senators was illegally released to the public. A former Democratic staffer was arrested for the crime.

A former staff member for Democratic Congresswoman Sheila Jackson Lee is still in jail tonight. Bail was denied this afternoon for Jackson Costco. He’s accused of committing several felonies including the release of personal information about Republican Senators on the Internet.

Jared Polis, the Democratic nominee for governor in Colorado, was involved in a physical altercation with an ex-employee in which he admitted to police he pushed the woman, according to a police report obtained by the Washington Free Beacon. The incident dates back to June of 1999 and took place at an office Polis had in Boulder for a company called JPS International LLC.

Democratic Congressman and DNC deputy chair Keith Ellison, back in August, was accused of physically abusing an ex-girlfriend.

A former girlfriend of U.S. Rep. Keith Ellison has accused him of domestic violence, which Ellison — a DFL candidate for Minnesota attorney general — denied on Sunday

The alleged incident between Ellison and Karen Monahan came to light Saturday night after her son posted about it on Facebook. She then confirmed it on Twitter. Ellison responded Sunday in a statement released by his campaign: “Karen and I were in a relationship which ended in 2016, and I still care deeply for her well-being.”

Are we seriously going to pretend there isn’t a media bias? These people are partisan propagandists, not journalists.