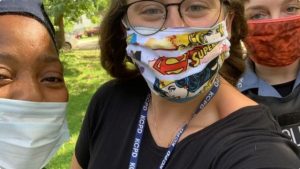 If you turn on the news right now it can make you feel like utter horse manure, thanks in large part to the constant barrage of stories involving violent protests, division between folks based on things like color and politics, and of course the darkness of a pandemic that is still taking lives and causing many folks to feel anxious and scared.

We’re in dark times, there’s no doubt about it. However, there are still good things going on out there in the world. Unfortunately, good news doesn’t make a lot of money for news networks, so they focus on stuff that will keep you tuning back in and bumping up their revenue from advertisers.

One example of the good still going on out there comes from a single mom who has donated recent lottery winnings to a Kansas City police officer who was shot in the line of duty, despite the fact she lost her job due to the pandemic.

Shetara Sims lost her job amid the coronavirus pandemic and had $7 to her name, local outlet WITN reported Tuesday. She found a $1 bill in a grocery store parking lot, bought a scratch-off ticket, and won $100.

Her daughter, Rakiya Edmonson, suggested they donate the money to an officer who was shot on the job on July 2 and remains in the intensive care unit.

“She won $100, and I said we should donate it to the police officer that got shot for his family to go eat and see him,” Edmonson said.

Sims agreed with her daughter and said she was motivated to donate because of the empathy officers had shown her following her sister’s 2012 murder.

“The detectives were really there for us. They were there for us more than anyone I can imagine. They did things they didn’t have to do,” the single mother went on to say. “They came to see my kids. They did a lot. They were fathers, therapists. They were everything.”

“I never seen the empathy that they had from strangers. They just gave us hope. They were good for us,” Sims continued.

But the good vibes don’t end there.

Officers from the area have decided to pay-it-forward by setting up a GoFundMe campaign to help Sims and her family during these hard times.

But just to show you how awesome of a person Sims really is, when the officers told her what they were doing for her, she responded by saying, “Don’t the officer and his family need it more?”