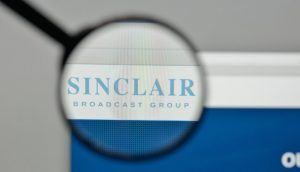 Sinclair Broadcasting group, the largest owner of local television stations in the nation, revealed on Monday that they were the victim of a ransomware cyberattack that interrupted news and sports coverage.

At this time, it’s not clear who is responsible for carrying out the attack against the broadcaster or what the motive behind it might be, but the attack did result in news shows and even some NFL games not being on the air Sunday and Monday across the company’s 184 local television stations in 86 markets.

“The event has caused — and may continue to cause — disruption to parts of the Company’s business, including certain aspects of its provision of local advertisements by its local broadcast stations on behalf of its customers,” Sinclair went on to say in a statement.

A series of massive attacks on the computer systems of the federal government , the Colonial Pipeline , and the meat producer JBS has brought mainstream awareness to the need for increased cybersecurity protections within governments and businesses.

The company said it has hired a cybersecurity forensic firm, which is still conducting an investigation, and engaged other incident response professionals. The television giant also notified law enforcement and other government agencies of the incident.

“The Company identified that certain servers and workstations in its environment were encrypted with ransomware, and that certain office and operational networks were disrupted. Data also was taken from the Company’s network,” the broadcaster added .

The Biden administration and Congress have tried to tackle the growing problem of ransomware with relevant executive orders and new legislation.

The House Energy and Commerce Committee recently passed a total of eight bipartisan bills over the summer to help equip the government and businesses with the necessary tools to handle the recent uptick in ransomware attacks.