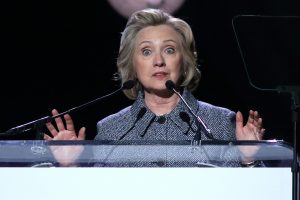 Seemingly a little desperate to maintain relevance now that her presidential ship has long since sailed, hit an iceberg, and sunk into the briny deep, Hillary Clinton is making a career change.

In spite of seeming to care little about the subject (if one goes by her policies and platforms while serving as Secretary of State and running for the big show, anyway), Clinton is taking a page out of Al Gore’s book and marketing herself as a “climate change expert.”

Hooray. Just what the world needs.

Last weekend, Clinton attended a meeting in the U.S. Virgin Islands with the “climate elite,” hosted by, of course, the Clinton Global Initiative.

“Glad to be in St. Thomas, USVI this morning speaking with leaders on the front lines of climate change,” Clinton posted on Twitter. “There are so many people working to create resilient communities and inspire climate-smart actions—tune in to hear from some of them at 11am ET.”

Glad to be in St. Thomas, USVI this morning speaking with leaders on the front lines of climate change. There are so many people working to create resilient communities and inspire climate-smart actions—tune in to hear from some of them at 11am ET: https://t.co/P5Jemwrmyr

Of course, being the titular figure of the Clinton Foundation has its perks—you get to make yourself the keynote speaker at any event you want, plus you can make bank off of all those carbon trading deals—even if your cap is a wee bit featherless in your newfound area of expertise.

Surprisingly, Clinton has been fairly balanced on the climate change issue throughout her career, in my opinion, in that she all but plugged her ears and said “lalalalala” whenever it came up.

I’ll take that over the mass hysteria we’ve come to know her party for any day.

In 2012, Clinton only paid lip service to the issue purely to avoid being outdone by Bernie Sanders. As The Guardian noticed, environmental issues were promptly dropped from her campaign stump speech once Sanders was out of the race. Sanders’ aides also said that climate change was more of an “add-on” rather than a central issue to her campaign.

While she’s not quite the conservative climate change rationalist I could come anywhere near lending my support to, her 2012 website portrays her as a far cry from the mania of Alexandria Ocasio-Cortez and “Green New Deal” proponents. For the most part, she would have just continued President Obama’s environmental efforts with the Paris Climate Accords serving as a yardstick for accomplishments within the nation.

Truthfully, if Clinton wanted to live out her golden years writing books or even giving the occasional $20 speech, that’d be fine by me. Sure, she belongs in prison, but if that ain’t happening, at least she could have the common decency to drift off into obscurity.

But, like some kind of monster in a horror movie, she’s still out there. Influencing people. Influencing legislators. Touting herself as an expert in an area she doesn’t give too big of a damn about. Oh, and, of course, spewing more exhaust and carbon dioxide into the air than a fleet of Hummers alongside her other jet-setting climate elitists on her way to swanky island resorts.