“SHUT UP” — The Only Argument Left to the Leftist! 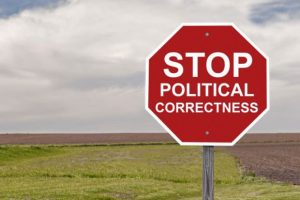 There is an old debater’s tactic that says if the points of your argument are weak, shout and pound the podium to distract attention from it.

Since history has demonstrated that all of the socialists, big-government, liberal leftists arguments are baseless, bankrupt and untenable, they have discovered that pounding the streets and shouting and screaming accusatory epithets will avert any need for defending their indefensible arguments for their worldview.

So the favorite and most successful tactic of today’s leftists is to shut up and shut down and silence all conservative voices by any means necessary. Since the secular left have very little intelligent arguments of their own, they resort to other means to win the public debate on hot potato issues. And the main means they use is bullying, intimidation, shouting, name-calling, mud-slinging, and simply preventing the other side from getting a hearing.

Author and retired attorney, John C. Wright, reveals the left’s “Shut Up” tactics as he notes, “The Left at one time made an attempt to construct arguments along political and economic lines, attempting to show that, for example, centralized control of the economy lead to the immense wealth of Venezuela, or to the immense political freedoms enjoyed by Stalin-Era East Germany.  Or they would argue that goods could be consumed before they are produced, or that a minimum wage did not create unemployment as low wage earners were priced out of the market, or that slavery was freedom, ignorance was strength, and unilateral disarmament provoked peace.

“That time is past. Their attempts have been laughed to scorn. Their skill at the administration of large cities is on display in Detroit and Chicago and other murder capitals of the world. The burgeoning economic growth produced by Keynesian meddling we have had for eight years under Obama, easily compared with the decades-long boom economy produced by Reagan’s policies.  The disaster of socialized medicine is perfectly clear to everyone, except, apparently, to GOP lawmakers.

“In the current day, all neutral onlookers recognize that the Academy, Hollywood, the Mainstream Media, the Courts of Law, and finally the Scientific Community have all become corrupt and beholden to political correctness. It is an empire of lies.

“The left controls most of American academia and has created environments on college campuses that deem any non-leftist views to be punishable “hate speech.”  Those expressing conservative views are to be “counseled” and “re-educated.”

“When a college occasionally attempts to engage in ideological diversity by inviting a conservative to speak on campus, the leftist faculty and students break out into violent riots – not to express opposition, but to silence those voices.”

Using “Orwellian newspeak” language, these professing proponents of diversity, repeatedly expose themselves as hypocrites by not only opposing diversity of thought and belief, but by attempting to shut it up and out of the public square.”

Those who hold views that are not consistent with this settled left-wing, liberal worldview, are immediately and vociferously  branded as racists, homophobic, bigots, fascists, and misogynists. All such malicious, and usually untrue, labels are have one goal in mind — to shut up and shut down any one who contest their positions and stifle free speech.

Madison Gesiotto, a staff editor for the Ohio State Journal of Criminal Law writes: From Yale University to the University of Southern California, institutions of higher learning nationwide have become prime locations for the left’s growing campaign to silence speech, specifically conservative speech.

Regularly, harmful labeling and harassment are used on college campuses as go-to tactics for liberal students and administrators to shut down conservatives who disagree with them.

Instead of arguing on merits, these leftist bullies attempt to delegitimize dissenters of their liberal opinions through the use of intimidation tactics and appalling labels like racist and right-wing extremist.

For example, people who don’t support abortion are labeled as misogynists wanting to control women, instead of being seen as people who care about the unborn.

Black women who voice conservative views are treated even worse, not only labeled as gender traitors but also characterized as race traitors or sellouts, as people who could not care less about citizens of their own race and gender.

John C. Wright sums up the “Shut Up” position of the leftists: For the Left, all thought is thought-crime. Thought must be abolished. If thought it so be abolished, all must be browbeaten into a dishonesty not just of statements and thoughts, but of words themselves.

The leftist must advocate that all men never be allowed to call anything by its right name.

Clarity of thought depends on clarity of definitions. Instead of saying ‘infanticide’, say ‘pro-choice’. Instead of saying ‘sexual perversion’ say ‘sexual orientation’ and so on. The art of substituting a real and honest word for a false and deceptive one is called ‘lying’ but this art requires that lying itself receive a new name: Political Correctness.

A man who promotes chastity, that is, simple prudence and honor in sexual relations, is called a homophobe, and accused of having a phobia that is, a psychopathological disorder.

Common sense and obvious facts can and must be ruled out of bounds.

Thought is thought-crime. Reason is hate-crime. Free Speech is hate-speech.

One who says marriage is between male and female is called a homophobe.

Once the argument merely ruling all questions out of bounds fails and all reason and logic has vanished, the Left is left with only one remaining tactic: to claim that speech is the same as violence, and therefore that the proper way to answer the curiosity of an unconvinced skeptic is with violence. If someone does not believe your words utterly and without question, don a facemask and bash them.

The police will step aside. For, as it turns out, they are also a sympathetic authority.”

And that’s what’s “left of the Leftists”!