In the “Sh!t You Won’t Ever Try in Texas” Department: Alt-Left memeber vows to bash heads with a bat! 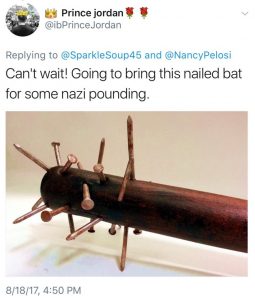 The Alt-left does not even hide their violent threats against conservatives.

I have been criticized this week for lumping leftists together in calling conservatives “Nazis.” However I make a clear distinction between what I call a liberal leftist and a typical, run of the mill, democrat. This is a perfect case in point: this liberal leftist wants to bash your head in.

Of course, you will never see this reported by the #FakeNews media.

Jordan wrote: “The patriot prayer rally is a nazi white supremacist event. I’ll be their to crush some nazi skulls.”

CNN would call this “peace through violence.”

The twitter user “ibPrinceJordan” retweeted the photo several times before it was deleted.

Jordan describes himself as: Alt-Left resistance leader. iraq war veteran. cute communist & catholic. I have a few other descriptions for him but I’ll leave it to your imagination.