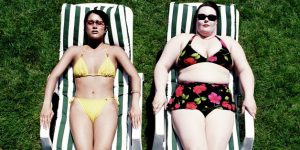 Campus Reform tells us an Arizona State University professor was distressed to discover in a recent study that her female peers do not desire “the stigma of extreme weight gain.”

Professor Breanne Fahs, a self-described “fat woman,” recently published an article in the Women’s Studies International Forum in which she declared that “the fear of fatness is far more extreme, exaggerated, and terrible than the lived realities of living in a fat body.”

Let me remind you that this is the same goofy chick that encouraged women to stop shaving their armpits. She actually tried to get her female subjects to feel good about gaining weight.  You husbands ever tried that?!?

“No participants described gaining 100 pounds as a positive thing to imagine.”

Fahs interviewed 20 random females for the article, asking them questions about their current weight and what they thought of the prospect of gaining 100 pounds.

Not surprisingly, not a single one of the women she surveyed was enthused about the idea, leading Fahs to remark with dismay that “no participants described gaining 100 pounds as a positive thing to imagine”

During the survey, in fact, four women “shrieked in disgust” or “started laughing uncontrollably” in response to Fahs’ questions, thinking the professor was joking.

Fahs also bemoans the fact that not a single woman in the study “mentioned any positive aspects of fatness, and no women identified fatness as physically or personally important (even hypothetically)”

Fahs, who praises fatness as a potentially “liberatory” experience, argues that obesity should not be viewed negatively, since, according to “feminist theory,” stigmatizing fatness is “connected to patriarchy, sexism, and the oppression of women.”

“That women did not identify the liberatory, political, or social implications of fatness seemed to reveal much about the contemporary framing of fatness as purely negative and solely based in stigma,” she writes, later adding that “thin women imagining fatness mostly see it in highly unrealistic (and intensely dreadful terms) rather than in more moderated, realistic terms.”

“If fat women in particular are to have dignity, respect, and pride about their bodies,” then “a more realistic understanding of weight gain is crucial to that goal,” she adds, concluding that “interventions that seek to lessen or buffer the intensity of women’s fear of weight gain could impact not only fat women’s lives, but all women’s lives.”